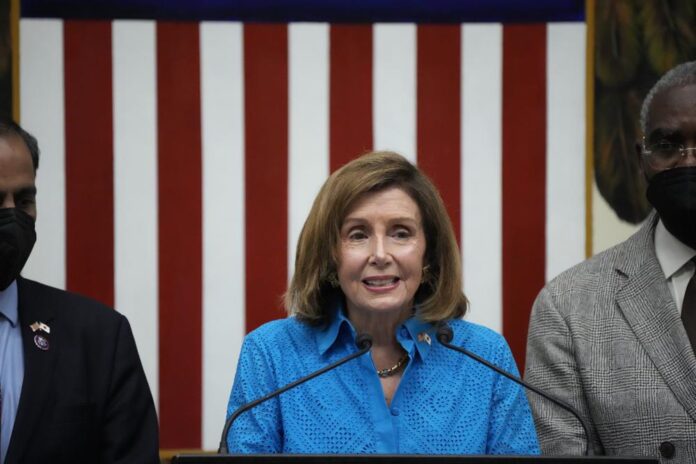 TOKYO (AP) — China will not isolate Taiwan by preventing U.S. officials from traveling there, U.S. House Speaker Nancy Pelosi said Friday in Tokyo, wrapping up her Asia tour highlighted by a visit to Taipei that infuriated China. 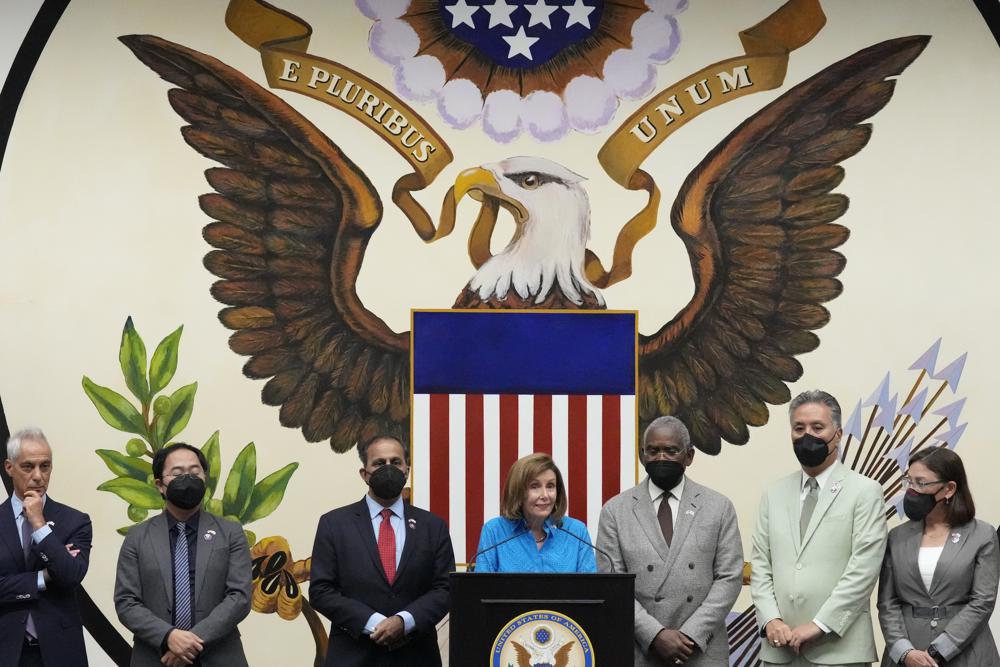 The Chinese have tried to isolate Taiwan, Pelosi said, including most recently by preventing the self-governing island from joining the World Health Organization.

“They may try to keep Taiwan from visiting or participating in other places, but they will not isolate Taiwan by preventing us to travel there,” she said, defending her trip that some say has escalated tension in the region.

Pelosi called the contention “ridiculous” and said that her trip to Taiwan was not intended to change the status quo for the island but to maintain peace in the Taiwan Strait. She praised Taiwan’s hard-fought democracy, including its progress in diversity including LGBTQ rights, and success in technology and business, while criticizing China’s violations of trade agreements, proliferation of weapons and human rights problems.

“If we do not speak out for human rights in China because of commercial interests, we lose all moral authority to speak out about human rights any place in the world,” Pelosi said. “China has some contradictions — some progress in terms of lifting people up, some horrible things happening in terms of the Uyghurs. In fact, it’s been labeled a genocide.”

Pelosi said “the two big countries” — the United States and China — must communicate in areas such as climate and other global issues. “It isn’t about our visit determining what the U.S.-China relationship is. It’s a much bigger and longer-term challenge and once again, we have to recognize that we have to work together on certain areas.”

“Our friendship with Taiwan is a strong one. It is bipartisan in the House and in the Senate, overwhelming support for peace and the status quo in Taiwan,” she said.

Pelosi, the first House speaker to visit Taiwan in 25 years, said Wednesday in Taipei that American commitment to democracy on the island and elsewhere “remains ironclad.”

Pelosi and five other members of Congress arrived in Tokyo late Thursday after visiting Singapore, Malaysia, Taiwan and South Korea. 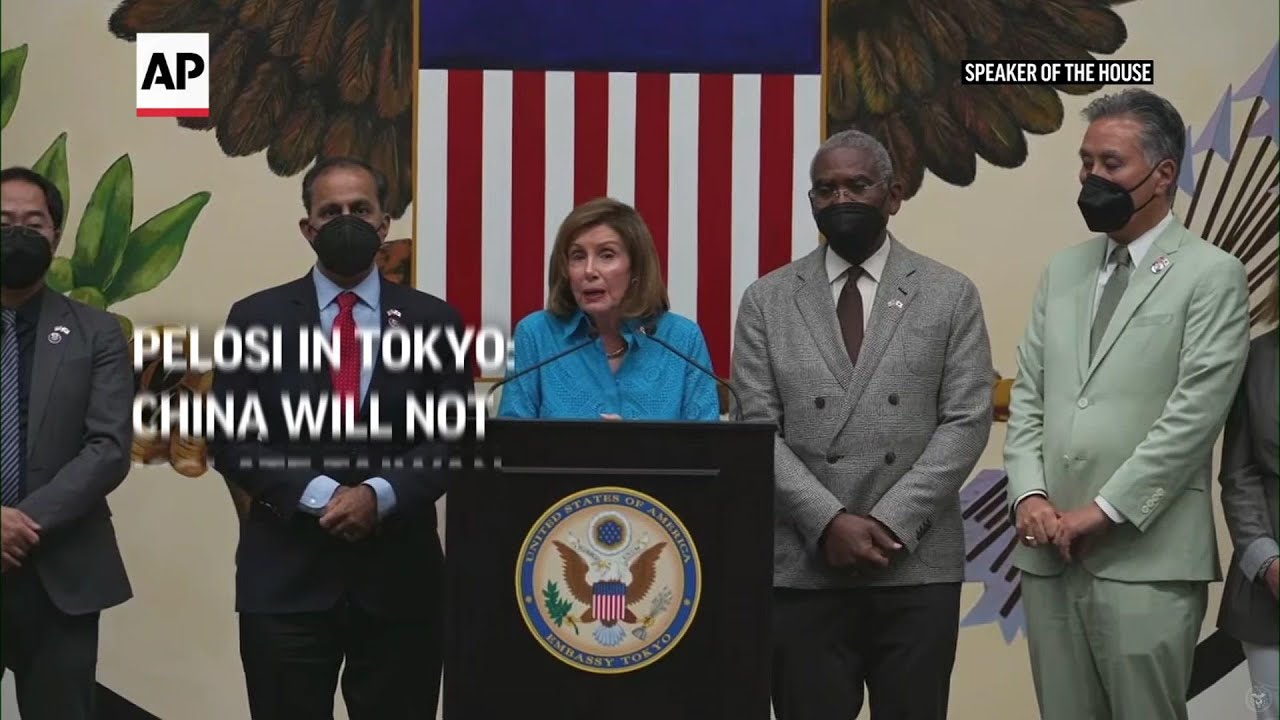 China, which claims Taiwan and has threatened to annex it by force if necessary, called her visit to the island a provocation and on Thursday began military drills, including missile strike training, in six zones surrounding Taiwan, in what could be its biggest since the mid-1990s.

Pelosi said that China had launched the “strikes probably using our visit as an excuse.”

Kishida, speaking after breakfast with Pelosi and her congressional delegation, said the missile launches need to be “stopped immediately.”

The Defense Ministry later said it believed the other four missiles, fired from China’s southeastern coast of Fujian, flew over Taiwan.

Japanese Foreign Minister Yoshimasa Hayashi, attending a regional meeting in Cambodia, said China’s actions are “severely impacting peace and stability in the region and the international community, and we demand the immediate suspension of the military exercises.”

Japan has in recent years bolstered its defense capability and troop presence in southwestern Japan and remote islands, including Okinawa, which is about 700 kilometers (420 miles) northeast of Taiwan. Many residents say they worry their island will be quickly embroiled in any Taiwan conflict. Okinawa is home to the majority of about 50,000 American troops based in Japan under a bilateral security pact.

At the breakfast Friday, Pelosi and her congressional delegation also discussed their shared security concern over China, North Korea and Russia, and pledged their commitment to working toward peace and stability in Taiwan, Kishida said. Pelosi and the delegation also held talks with her Japanese counterpart, lower house Speaker Hiroyuki Hosoda, after briefly observing a plenary session where they were welcomed by standing ovation.

Japan and its key ally, the U.S., have been pushing for new security and economic frameworks with other democracies in the Indo-Pacific region and Europe as a counter to China’s growing influence amid rising tensions between Beijing and Taipei.

Days before Pelosi’s Taiwan visit, a group of senior Japanese lawmakers, including former Defense Minister Shigeru Ishiba, visited the island and discussed regional security with Taiwanese President Tsai Ing-wen. Ishiba said Japan, while working with the United States to prevent conflict in the Indo-Pacific, wants a defense agreement with Taiwan.

On Thursday, the foreign ministers of the Group of Seven industrialized nations issued a statement saying “there is no justification to use a visit as pretext for aggressive military activity in the Taiwan Strait.” It said China’s “escalatory response risks increasing tensions and destabilizing the region.”

China cited its displeasure over the statement for the last-minute cancellation of talks between the Chinese and Japanese foreign ministers on the sidelines of the Association of Southeast Asian Nations meeting in Cambodia on Thursday.

In recent years, South Korea has been struggling to strike a balance between the United States and China as their rivalry has deepened.

The Chinese military exercises launched Thursday involve its navy, air force and other departments and are to last until Sunday. They include missile strikes on targets in the seas north and south of the island in an echo of the last major Chinese military drills in 1995 and 1996 aimed at intimidating Taiwan’s leaders and voters.

Taiwan has put its military on alert and staged civil defense drills, while the U.S. has numerous naval assets in the area.

China also flew war planes toward Taiwan and blocked imports of its citrus and fish.

China sees the island as a breakaway province and considers visits to Taiwan by foreign officials as recognizing its sovereignty.

The Biden administration and Pelosi have said the United States remains committed to the “one China” policy, which recognizes Beijing as the government of China but allows informal relations and defense ties with Taipei. The administration discouraged but did not prevent Pelosi from visiting.

Pelosi has been a long-time advocate of human rights in China. She, along with other lawmakers, visited Beijing’s Tiananmen Square in 1991 to support democracy two years after a bloody military crackdown on protesters at the square.

As leader of the House of Representatives, Pelosi’s trip has heightened U.S.-China tensions more than visits by other members of Congress. The last House speaker to visit Taiwan was Newt Gingrich in 1997.

China and Taiwan, which split in 1949 after a civil war, have no official relations but multibillion-dollar business ties.

Pelosi landed  in Japan on Thursday 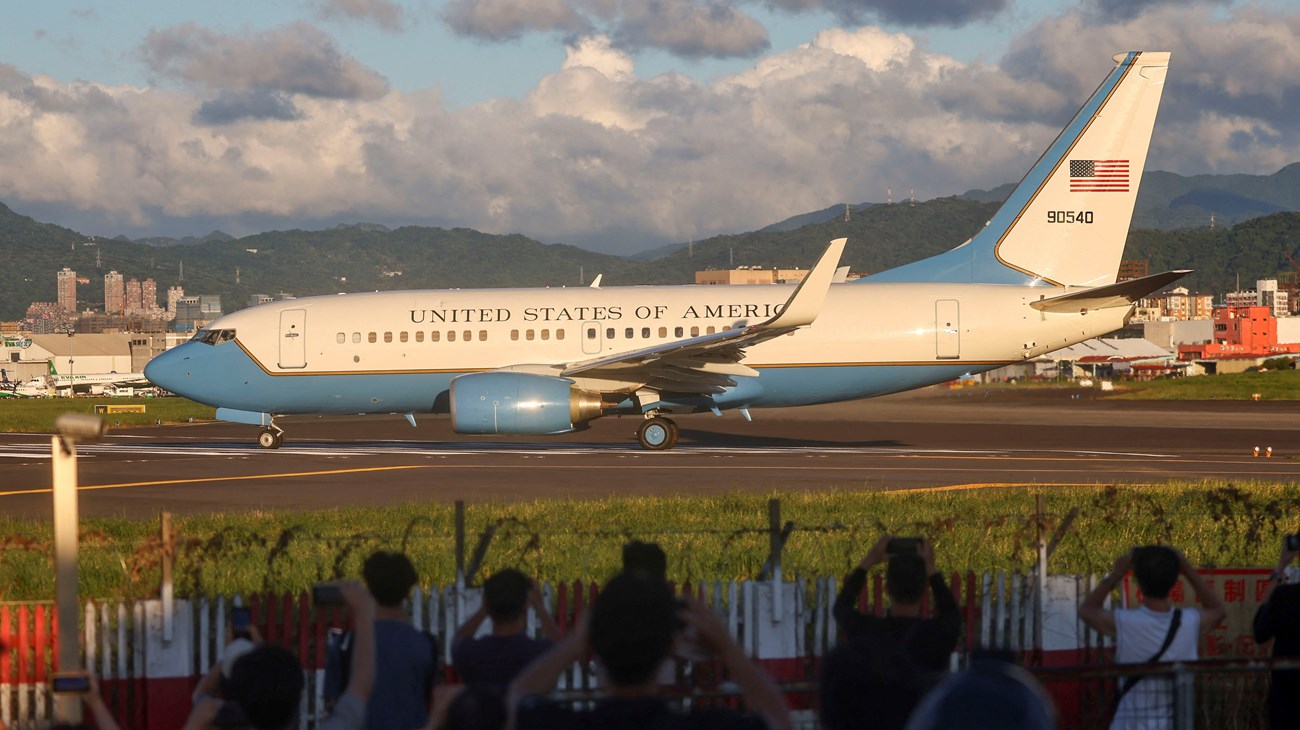 The plane carrying US House Speaker Nancy Pelosi landed Thursday in Japan, the last leg of her Asian tour, after a visit to Taiwan that angered China.

AFP reporters saw the plane landing at Yokota Air Force Base in Tokyo, where Pelosi arrived from South Korea after this week she became the most senior US official to visit Taiwan in 25 years.