Momen paid a courtesy call on Senior Minister of Cambodia 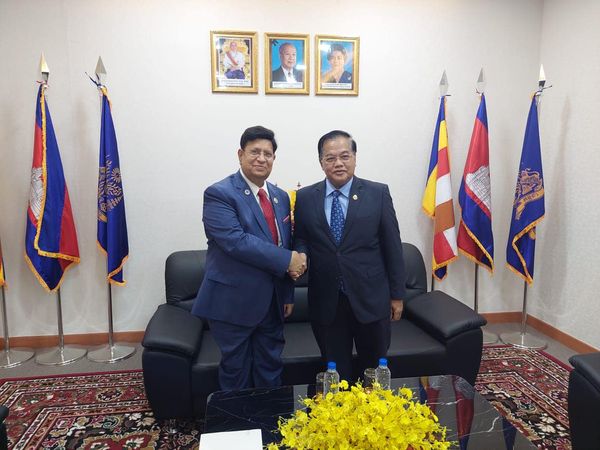 Dhaka August 05 2022 :
Foreign Minister Dr. A. K. Abdul Momen MP paid a courtesy call on H.E. Oknha Datuk Dr. Othsman Hassan, Senior Minister of Cambodia, in Charge of Special Mission (Islamic Affairs), during his three-day visit to Cambodia, to attend the 29th ASEAN Regional Forum (ARF).
During the meeting, Dr. Momen apprised the Minister about the country’s long established tradition of liberal, moderate and tolerant religious way of life that conditioned an environment of non-communal peaceful coexistence by the followers of different faiths. He also stated that Bangladesh is a bright example of communal harmony.
Foreign Minister Momen underscores Bangladesh’s active role for promoting the correct image and teachings of the great religion of Islam, both domestically and internationally, as a member of the OIC, and sponsors and promotes the Culture of Peace under the UN auspices.
The two Ministers also discussed on the issues of Rohingya repatriation, trade & investment, agriculture, aquaculture & fisheries , energy, health and pharmaceuticals, connectivity, ICT, tourism, halal trade, human resources development, youth & cultural exchanges etc.
At the conclusion, Foreign Minister Momen invited the Cambodian Minister to visit Bangladesh at a date of mutual convenience. 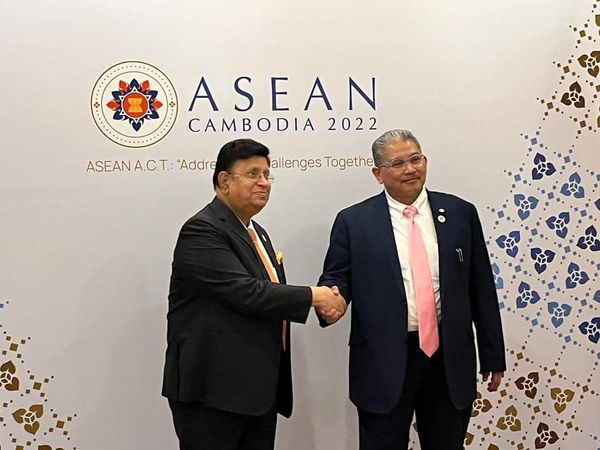 Dr. Momen is currently on a three-day visit to Cambodia to attend the 29th ASEAN Regional Forum (ARF) ministerial meeting.

They discussed the issues of mutual interest, reasserting their commitment for further strengthening the excellent relations between the two friendly countries in the days ahead.

Dr. Momen shared the concerns of Bangladesh on the issue of Forcibly Displaced Myanmar nationals and urges a more coordinated and proactive support of ASEAN countries for persuading Myanmar for creating a congenial situation for an early, safe and dignified repatriation of more than 1.1 million Myanmar nationals from Bangladesh. He also sought the support of Brunei Darussalam in expediting Bangladesh’s bid to be a Sectoral Dialogue Partner (SDP) of ASEAN. 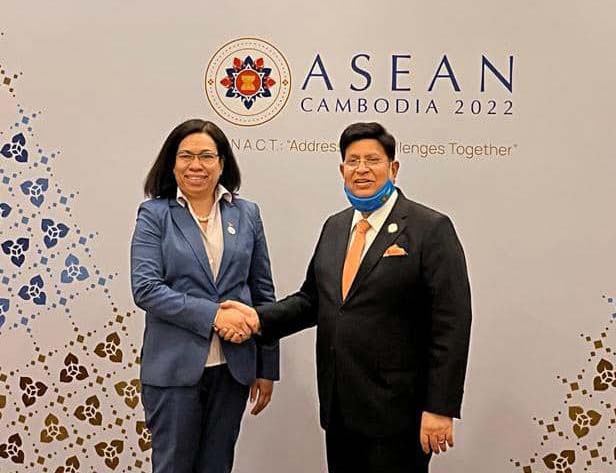 Both the Ministers expressed deep satisfaction at the excellent bilateral relations between the two countries and pledged to further strengthen the relations in depth and dimensions.

Foreign Minister Momen underscored the need for regular exchange of visits at the high political and official levels as it is a very important tool for strengthening existing relations. The meeting concluded to collaborate and share experience toward a more efficient partnership in the days ahead. Bangladesh Ambassador to Cambodia and Director General of Regional Organizations Wing of the Ministry of Foreign Affairs accompanied the Foreign Minister during the meeting. 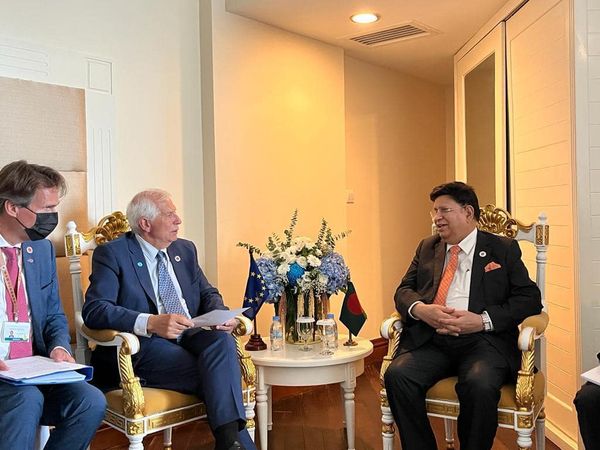 After exchanging pleasantries and reminiscing of their last meeting in New York in September 2021, on the sidelines of UNGA, Dr. Momen informed the HRVP of the tremendous success of Bangladesh in reducing of the poverty level. He also informed about Bangladesh’s crises due to the Ukraine War. He also valiantly raised the issue of repatriation of the Rohingyas, which has never seen any light for the past five years. Moreover, keeping pressure on Myanmar to solve the issue, as countries like the UK, USA, Spain, Japan, Korea, France etc. are investing and doing even more trading with Myanmar. He strongly sought the EU’s support in pressurizing Myanmar to take back their nationals; otherwise, the security and stability of Myanmar and Bangladesh and the entire region may be jeopardised. 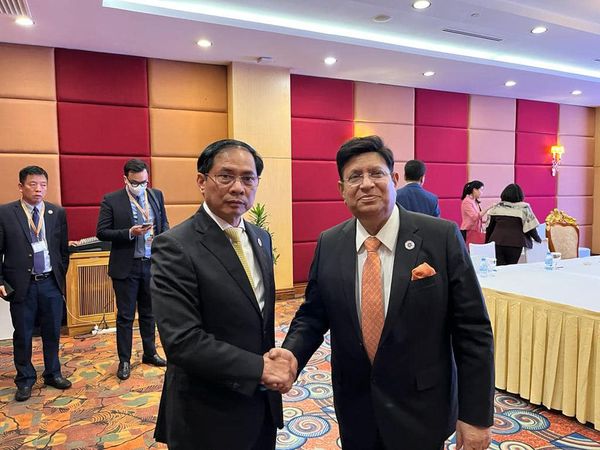 Dr. Momen invited Vietnam to invest in different sectors, particularly in priority sectors in the Economic zones, agriculture and ICT sectors of Bangladesh. He also suggested the regular exchange of more technical expertise to boost trade, commerce and investment further. He requested Vietnam to exert its friendly influence on Myanmar to take its citizens back to Myanmar. He also sought Vietnam’s support in favour of Bangladesh’s candidacy as a Sectoral Dialogue Partner (SDP) of ASEAN.