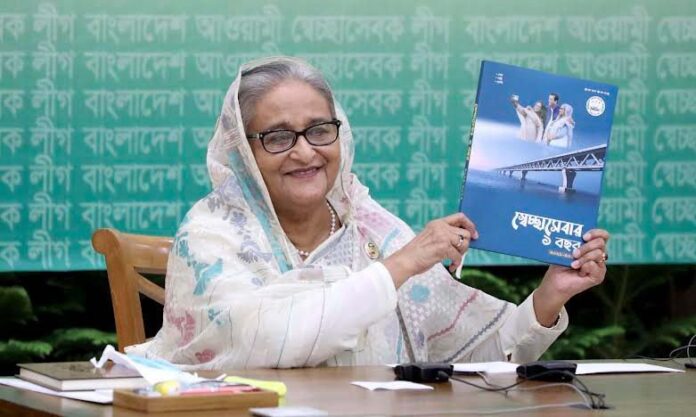 Prime Minister Sheikh Hasina today urged her party men to highlight the government’s development activities before the people, saying many conspiracies are being hatched to disrupt the country’s progress, but none can halt its indomitable journey towards development.

“I believe that, no matter, so many conspiracies (are there), none can impede the progress of Bangladesh. None can halt the country’s impeccable speed. Insha Allah we will move forward,” she said.

The premier said this while addressing the 28th founding anniversary of Bangladesh Awami Swechasebak League (BASL) at Krishibid Institution Bangladesh (KIB) in city as the chief guest, joining virtually from her official residence Ganabhaban here.

Mentioning that Bangladesh has to deal with many things due to the international situation, she said, “I have belief that we can move forward overcoming all the global crises as like we had been able to do facing natural disasters (in past).”

Sheikh Hasina, also the President of ruling Awami League, called upon the leaders and activists of BASL to further invigorate the organization and devote them to serve the people and humanity.

She reiterated her call to the party people to present the government’s ongoing development works to the countrymen.

“The people will have to be informed about the development spree carried out by the government repeatedly visiting every area,” she said.

About the critics, the prime minister asked the party men not to pay heed to their criticism, saying, “no matter what they say, no matter how much they bark, no need to listen to them, no need to respond to their words.”

The prime minister also unveiled the cover of a publication titled “Swechasebar Ek Basar” (One year of Volunteering) on the occasion.

At the outset of the function, a video documentary on the activities of BASL in last year was screened.

Besides, another documentary on the life and works of BASL President Nirmal Ranjan Guha, who died on June 29 while undergoing treatment at Mount Elizabeth Hospital in Singapore, was also played.

The founding anniversary of BASL coincides the birthday of the architect of Digital Bangladesh Sajeeb Wazed Joy, son and ICT Affairs Advisor of Prime Minister Sheikh Hasina, as well as the grandson of the Father of the Nation Bangabandhu Sheikh Mujibur Rahman.

On this auspicious occasion, leaders and activists of the Swechasebak League cut a cake.

The prime minister said the government is carrying out the development works in the country, with introducing different educational systems, training and technical education alongside the establishment of Digital Bangladesh.

She continued they have launched Bangabandhu Satellite-I into space, provided broadband services to the villages while employment opportunities have been created at people’s doorsteps through digital management.

She also said freelancers have been made, employment has been created for unemployed people largely while communication systems were developed through the construction of roads and bridges.

She went on saying that her government provided electricity to every house, offered health services and education within the reach of the people and distributed housing to the homeless.

The Awami League chief directed the Swechasebak League to highlight all these development works before the people.

She asked the leaders and activists of BASL to find out homeless and landless families, if any, in their areas so the government can provide them with houses.

Mentioning that people from all walks of life such as Dalit, Hijra, Bede etc are included to this housing scheme, she said her government is doing this being inspired by their political thoughts and plans of economic development for all.

Sheikh Hasina said, “People’s mind is changed and they forget as like the six seasons of the country are changed every two months. So, we will have to tell and explain to people what we have done so that it does not go far from people’s mind.”

She said there is a group in the country which wants to mislead people and that is why, let not anyone to be confused after hearing the words of these people.

The prime minister also expressed her hope that Swechasebak League will continue to work in the service of the people and stand by the people in times of trouble.

She also asked the leaders and activists of the organisation to dedicate their lives to build the “Sonar Bangla” as dreamt by Father of the Nation Bangabandhu Sheikh Mujibur Rahman.

Regarding the reserve, the Prime Minister said Bangladesh would be able to meet import expenditures of six to nine months with the existing foreign currency reserves.

“Why have we kept reserves? It is usually kept in our hands to import food grains and other (essential) items for at least three months during any emergency crisis. We’ll be able to import the food for six to nine months, not only for three months, with the reserve that we have now,” she said.

Despite having enough reserve, she said, the government will have to take steps to grow more crops in order to save the foreign currencies and keep the forex reserve for any emergency.

She said Bangladesh had to spend huge amounts of foreign currencies from the reserve to import the materials for development works, capital machines for the industries as well as Covid-19 vaccines, testing kits, syringe and all other Covid-related materials.

The people of the country would be benefited when the industries developed with the imported capital machineries would go in operation, she noted.

She said the government continues providing a huge subsidy, placed such a big budget, raised the per capita income and has been able to keep up the GDP growth.

The Prime Minister said her government pledged to provide electricity to every house and also kept this promise, but now many developed countries are taking austerity measures over the use of energy amid the global economic recession.

“Also we’ve to take precautionary measures so that we do not fall in a great danger . . . we’ve taken steps for limited use of electricity. But, it doesn’t mean that we don’t have any energy or it is running out,” she added.

Mentioning that it is true that Bangladesh needs to import diesel, she said it doesn’t import petrol and octane as the country gets these as byproducts of gas extraction. “We’ve much more petrol and octane than the demands we have. We can even sell these sometimes,” she added.

She observed, “We’ve some wise men who talk about many things at times. But I don’t know whether they keep any knowledge over so many matters.”

Saying that they forget small things due to their huge knowledge, Sheikh Hasina alleged that they want to mislead the people talking back and forth.

The premier said many intellectuals write many things here and an economist wrote an article about the construction of Padma Bridge, saying that the bridge was constructed unnecessarily as it would not be profitable.

She said the economist, in his article, questioned who would use the bridge and raised objection over the installation of rail tracks in the Padma Bridge as the people of the southern region travel through launches.

“It is the thought of some economists and they write articles . . . I doubt how much they know Bangladesh and I don’t know whether they have ever visited the southern region,” she added.

Not mentioning name, Sheikh Hasina said an organisation is there that finds everything bad. The 2007 caretaker government put something in their brain and for that they don’t like a healthy democratic trend to continue in the country and they don’t see that the country is progressing.

“If an unusual government is there, their values get increased. They think they are wise and they can do everything,” she said.

The Prime Minister thanked the leaders and activists of Swechasebak League for their volunteer works for the help of the people during the recent flood and vaccination campaign.

She praised late Nirmal Ranjan Guha for his hard work for the welfare of the people.