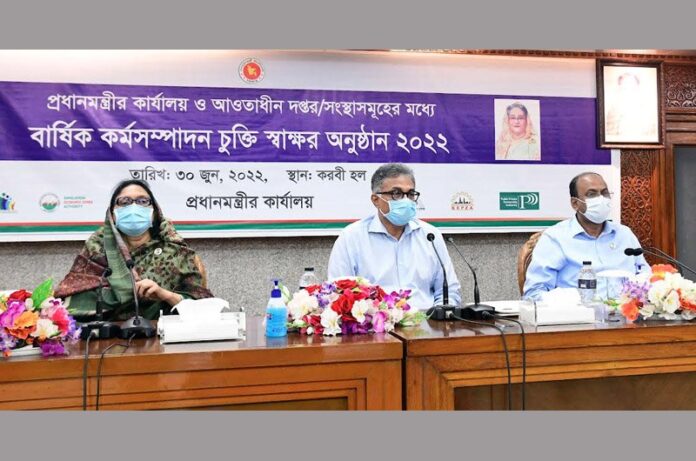 The Prime Minister’s Office (PMO) today signed the Annual Performance Agreement (APA) with its seven organisations for fiscal 2022-23 aimed at implementing the government’s development goals under an effective, efficient and dynamic administrative system.

The APA was inked at a function at the PMO in the city’s Tejgaon area.

PMO Senior Secretary Md Tofazzel Hossain Miah presided over the function while senior officials, including chiefs of subordinate offices of the PMO and director generals of the PMO, were present.

The PMO secretary inked the APA for fiscal 2022-23 on behalf of the Prime Minister’s Office while chairmen of BIDA, BEZA, BEPZA, PPPA and NSDA, director general (DG) of NGO Affairs Bureau and project director (PD) of Ashrayan-2 Project signed it on behalf of their respective organisations.

At the function, a comparative review was held on achievements against different indexes of the APA of the last fiscal year and the targets set in this year’s APA.

Speaking on the occasion, the PM’s Principal Secretary said the APA should incorporate the rewards and punishments while PMO Secretary stressed the need for its regular monitoring.

The APA is a result-based working plan to reach the desired goal through increasing the efficiency and accountability of the public servant.