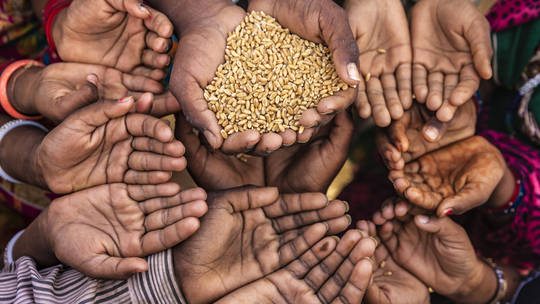 Global aid group Oxfam has eviscerated the G7 countries for pledging a pittance to fight the global food crisis.
The G7 countries are “leaving millions to starve and cooking the planet,” global aid group Oxfam’s head of inequality policy, Max Lawson, declared in a statement issued on Tuesday, condemning the mere $4.5 billion the industrialized nations have pledged to fight the worst hunger crisis in decades.

Lawson argued that “at least $28.5 billion more” was needed to “finance food and agriculture investments to end hunger and fill the huge gap in UN humanitarian appeals.” G7 countries have pledged about $14 billion to fight global food insecurity this year, including the amount pledged on Tuesday.

However, it’s not clear how much of that money has actually been distributed to its intended recipients. While the US Congress passed a major weapons and aid package for Ukraine last month that included $5 billion to “fight global hunger,” none of the hunger money had been sent out as of this past weekend, according to Politico.

With even wealthy G7 countries facing economic difficulties in the wake of two years of Covid-19 shutdowns, the Oxfam rep suggested there were other ways they could fight hunger among the world’s most vulnerable. “They could cancel debts of poor nations” or “tax the excess profits of food and energy corporates,” he argued, or “ban biofuels,” which divert crops that could be used for food to producing energy instead.

Most importantly they could have tackled the economic inequality and climate breakdown that is driving this hunger. They failed to do any of this, despite having the power to do so.

Lawson noted that while the world faces its worst hunger crisis “in a generation,” the rich have seen their profits soar at the same time. “Corporate profits have soared during Covid-19 and the number of billionaires has increased more in 24 months than it did in 23 years,” he said, noting that the food industry alone has produced 62 new billionaires and calling the hunger emergency “big business.”

The UN World Food Program begged the G7 nations to “act now or record hunger will continue to rise and millions more will face starvation” last week, declaring that it had a plan – “the most ambitious in WFP’s history” – requiring $22.2 billion to “both save lives and build resilience for 152 million people in 2022.”

It’s not clear where they obtained that figure, as the G7 countries themselves have said that 323 million people are on the brink of starvation because of this year’s dire food crisis, with 950 million expected to go hungry in total in 2022.

While the G7 countries have been reluctant to open their wallets to solve world hunger, tens of billions have been pledged in economic and lethal aid to Ukraine, where the war has interrupted a wheat harvest that typically accounts for a fifth of the world’s “high-grade” wheat and 7% of all wheat. The UN’s food program normally buys half of its grain from the country.

Exacerbating the supply crisis are record droughts around the world, with East Africa particularly affected. One person is estimated to die of hunger every 48 seconds in Ethiopia, Kenya, and Somalia, where the droughts are the worst in 70 years, according to Oxfam.