President of Russia held meeting with graduates of higher military schools
Dhaka June 22 2022 :
In the Grand Kremlin Palace, Kremlin, Moscow, the President met with top graduates of higher military schools of the Defence Ministry, the Emergencies Ministry, the Federal Security Service, the Federal Guard Service and the National Guard, as well as higher education institutions of the Interior Ministry and the Federal Penitentiary Service, on June 21, 2022, 13:20.
The speech delivered by the President of Russia is as follows: 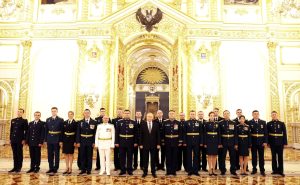 President of Russia Vladimir Putin: Comrade officers, friends,
I am glad to welcome and congratulate you on your successful graduation.
Today we honour top graduates of military academies, universities, and specialised educational establishments here in the Kremlin’s St George Hall, the symbol of military glory of the Fatherland.
You are going to carry on the legendary traditions of valour and honour, solidarity and patriotism, which have always served as a reliable support for the Army and Navy. It was so throughout the centuries-old history of Russia: in the battles of Chudskoye Lake, Poltava and Borodino, during the First World War and the Great Patriotic War. 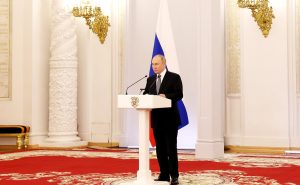 Today’s Russian officers and soldiers – the successors of the generation of victors, grandchildren and great-grandchildren of the Great Patriotic War heroes – are selflessly fighting for the Fatherland, for our people, fighting international terrorists in Syria, protecting Donbass from neo-Nazis, and defending peace and security for our people, and Russia’s right to sovereign development.
We are proud of our servicemen acting bravely and professionally, like true heroes, during the special military operation. Russian soldiers of different nationalities fight shoulder to shoulder. In this unity, belief in the justice of their cause, in that huge, truly popular support that our soldiers feel, is the great, invincible power of Russia. 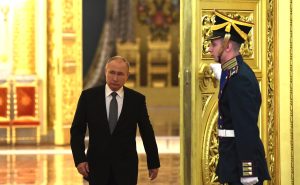 We will continue to develop and strengthen our Armed Forces, considering potential threats and risks, and improve their combat power based on the lessons from today’s military conflicts. The priority areas include equipping troops with new weapon systems that will determine the combat effectiveness of the Army and Navy in the years and decades to come.
In addition to the new weapons already tested on the battlefield, the troops have begun to receive S-500 air and missile defence systems that have no analogues in the world.
The Sarmat heavy intercontinental ballistic missile was successfully tested. It is expected that the first such complex will be on combat duty at the end of the year. 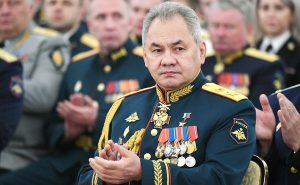 Plans call for using robotics, the most advanced means of control and reconnaissance, and drones much more widely, as well as actively developing weapon systems based on new physical principles. I am talking about laser, electromagnetic and other weapons. And, of course, intensive combat training of military units and groups will continue, as well as practising interaction with our allies.
The effectiveness of our work to improve Russia’s defensive capacity directly depends on the officer corps, that is, on you and your colleagues. You will soon take charge of military units. I am sure that you will help your subordinates, brothers in arms to master the advanced military equipment and will be an example of honour and team spirit. 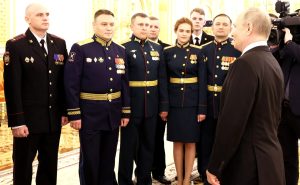 Comrade officers,
You are young, energetic and daring people, highly motivated, and this is great. Still, I urge you to be careful, think things through and gradually learn about the current service environment. Do not forget that the effective use of theoretical knowledge you got when training is only possible after receiving some practical experience.
Of course, working with personnel is a crucial task. I want to quote General Mikhail Dragomirov, a prominent military theorist: “The devotion to the Motherland and to the interests of a common cause is the main goal of military education.”
Comrade officers,
The development of Russia and the security of our citizens directly depend on the efficient work of the law-enforcement system and special services, the reliable work of rescuers. I want to warmly greet officers who will soon join the ranks of the Federal Security Service and the Interior Ministry, the National Guard, the Emergencies Ministry, the Federal Guard Service, the Investigative Committee and the Federal Penitentiary Service.
Your main tasks include the protection of legal rights and freedoms of Russian citizens, an uncompromising fight against terrorist and extremist threats, against crime and corruption. I am sure that you will work in a systemic and consistent way and serve as an example of decency and professionalism for your colleagues. 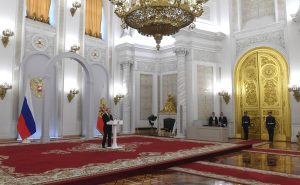 Friends,
You have chosen the difficult military path as your career and have already achieved high and excellent results.
On this day, I would like to pass on words of sincere gratitude to your mentors and everyone who shared their knowledge and experience, taught you to stay loyal to the laws of military brotherhood and camaraderie, and wholeheartedly strove for you to become real military professionals.
You have the high honour of becoming Russian officers. Be worthy of this title: serve the Motherland and our people honestly and professionally.
I wish you and all the graduates of 2022 good health and success.
Good luck. 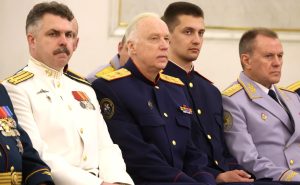 Vladimir Putin: Comrade officers,
You have just completed your studies and understand very well that every thinking person in Russia constantly analyses everything that happens inside and outside our country.
There has probably never been a time in the history of Russia when we simply felt that we could do nothing, as in a prosperous, but hardly visible country on the map. Russia has always gone through trials, just like any person who strives towards their goal; they always go through certain trials.
It almost never happens that someone is simply taken by the hand and led to the desired result, and if someone was led by hand, then, as a rule, this person cannot effectively deal with what they got, what fell from the sky. In order to achieve a goal, you always need to go through certain difficulties, but, as you know, walk and you shall reach.
Russia is now going through another set of trials, and we all know how closely the entire world and our country are watching the developments in the civilian sphere. Yes, there are restrictions. Yes, there are different ways to overcome them. And we can and will overcome them. 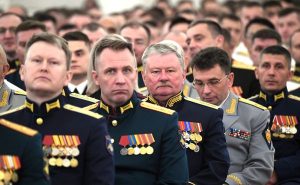 The same is happening in the sphere of the state military establishment. Our army and navy are improving in all the most important segments in accordance with today’s requirements, and this improvement will benefit the army, navy and the entire state military establishment.
There can be no doubt that we will become even stronger. And the effectiveness of this process largely depends on you.
I wish you all good luck once again.
All the best. 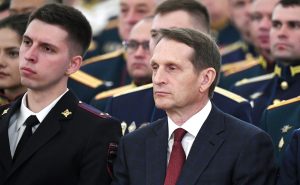