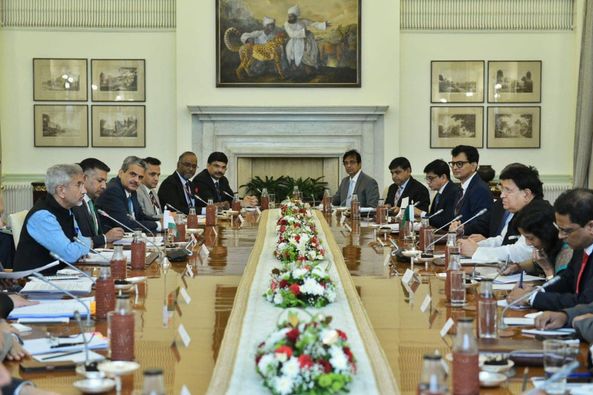 7th Round of India-Bangladesh Joint Consultative Commission held in New Delhi
Dhaka June 20 2022 :
7th Round of India-Bangladesh Joint Consultative Commission
The seventh round of the India-Bangladesh Joint Consultative Commission (JCC) held in New Delhi on June 19, 2022.
The JCC was co-chaired by Dr. S. Jaishankar, External Affairs Minister of India and Dr. A.K. Abdul Momen, M.P., Minister for Foreign Affairs of Bangladesh.
The Ministers recalled the warmth shared by both sides, borne out of the shared sacrifices of the 1971 Liberation War of Bangladesh, that have forged close historical and friendly relations that transcend the traditional notion of a strategic partnership.
The Ministers welcomed the further strengthening of bilateral ties with the unprecedented visits by both the President and the Prime Minister of India to Bangladesh in 2021 to jointly commemorate three epochal events – the birth centenary of Bangabandhu Sheikh Mujibur Rahman; the fiftieth anniversary of the independence of Bangladesh and the golden anniversary of India-Bangladesh diplomatic ties.
A role model for bilateral and regional cooperation, the Ministers appreciated that the trust and mutual respect shared between the two countries has only strengthened in the last decade. A recent testimony of this was the launch of the trailer of ‘Mujib – making of a nation’, the jointly produced biopic on Bangabandhu Sheikh Mujibur Rahman at the Cannes Film Festival in May 2022.
Noting that this was the first in-person JCC meeting convened since the onset of Covid-19 pandemic, with the previous edition held virtually in 2020, the two Ministers appreciated the efforts undertaken by both countries to jointly fight Covid-19. The Ministers comprehensively reviewed all areas of ongoing cooperation, including the implementation of decisions taken during the visits of President Ram Nath Kovind in December 2021 and of Prime Minister Narendra Modi in March 2021, Virtual Summit between the Prime Ministers of the two countries in December 2020, as well as the last virtual meeting of JCC in September 2020. 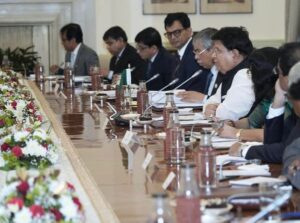 The Ministers expressed satisfaction that despite challenges posed by the Covid-19 pandemic, both countries have worked closer than ever before in every sector, from security and border management to mutually beneficial trade and investment flows, as well as enhanced bilateral and sub-regional multimodal connectivity, greater power and energy cooperation, developmental assistance and capacity building exchanges, cultural and closer people-to-people ties. The two ministers agreed to work closely together to further deepen and strengthen cooperation in the areas of common rivers and water resources management, IT and cybersecurity, renewable energy, agriculture and food security, sustainable trade, climate change and disaster management.
Both Ministers appreciated that in addition to the high-level visits, there has been intensive engagements through various bilateral mechanisms and agreed to further enhance partnership-building efforts with renewed vigour and regularity. In this regard, both Ministers tasked their officials to accelerate cooperation, with further attention paid to addressing issues and finding durable solutions for the mutual benefit of both the peoples.
Both sides reiterated the importance of safe, speedy and sustainable return of the forcibly displaced persons from the Rakhine State of Myanmar, currently being sheltered by Bangladesh.
Acknowledging the excellent bilateral ties shared between the two countries, both Ministers reiterated the importance of closer cooperation to expeditiously implement the Leaders’ decisions and to further deepen and strengthen mutual engagement across all sectors of bilateral cooperation.
During his visit in New Delhi, Foreign Minister Momen will also pay courtesy call on Vice President M. Venkaiah Naidu and other dignitaries of the Government of India.
It was agreed that the 8th round of India-Bangladesh JCC will be held in Bangladesh in 2023.
Share
Facebook
Twitter
Pinterest
WhatsApp
Previous articleডিএমপির মাদকবিরোধী অভিযানে গ্রেফতার-৬৪ হাসানুজ্জামান
Next articleবঙ্গবন্ধু স্বপ্নচারী এবং দূরদর্শী ব্যক্তিত্ব ছিলেন: ড.কলিমউল্লাহ