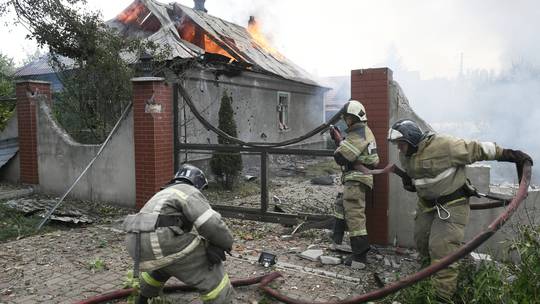 Twelve people were also injured in strikes on Saturday, local authorities claimed.
Five people have been killed by Ukrainian shelling of areas in the Donetsk People’s Republic (DPR), the latter’s territorial defense claimed on Saturday, adding that 12 more have been injured.

Among the victims were emergency workers who came to put out the fires caused by the initial strikes but then came under new fire themselves, resulting in two dead and three injured, a statement outlined.

“Ukrainian armed formations continue to shell the Voroshilovsky district of Donetsk. Throughout the day, about 50 shells of 155-mm caliber targeting the city center were fired from the positions of Ukrainian militants in Avdeevka,” the DPR insisted.

According to its mayor, Alexey Kulemzin, a university building and nearby residential buildings were damaged in the strikes.

Also on Saturday, the territorial defense stated that five people were injured in the town of Komsomolskoye in the southeast of the DPR after a Ukrainian Tochka-U ballistic missile apparently targeting the town was intercepted by the local militias.

The strike came a day after Ukrainian forces reportedly shelled a hospital in the city of Donetsk, damaging a gas pipeline that goes through the grounds of the hospital.

Also, 77 miners were stuck underground after shelling left a local mine without power, the territorial defense announced earlier on Saturday. They were all subsequently rescued.

On Friday, Russian President Vladimir Putin described the strikes on residential areas of Donetsk “a crime against humanity.”

Earlier this week, several Ukrainian officials, including President Volodymyr Zelensky, vowed to “liberate” all of the country’s former territories, including Crimea, which rejoined Russia in 2014, and the DPR plus the neighboring Lugansk People’s Republic, which Russia has also recognized as an independent states.

When launching its special military operation, in February, Moscow pledged to “denazify” Ukraine.

Russia attacked Ukraine in late February, following Kiev’s failure to implement the terms of the Minsk agreements, first signed in 2014, and Moscow’s eventual recognition of the Donbass republics of Donetsk and Lugansk. The German- and French-brokered protocols were designed to give the breakaway regions special status within the Ukrainian state.

14 shells were launched at the settlement of Panteleymonovka and six shells – at Mikhailovka.The Ukrainian armed forces fired 20 shells of 152 mm caliber at the territory of the Donetsk People’s Republic, the DPR mission to the Joint Ceasefire Coordination and Coordination Center (JCCC) reported on Sunday.

According to the mission, 14 shells were launched at the settlement of Panteleymonovka and six shells – at Mikhailovka.

The situation at the line of engagement in Donbass escalated on February 17. The Donetsk and Lugansk People’s Republics (DPR and LPR) reported the most massive bombardments by the Ukrainian military in recent months, which damaged civilian infrastructure and caused civilian casualties.

On February 21, Russian President Vladimir Putin announced recognizing the sovereignty of the Donetsk and Lugansk People’s Republics. Russia signed agreements on friendship, cooperation and mutual assistance with their leaders. Russia recognized the Donbass republics in accordance with the DPR and LPR constitutions within the boundaries of the Donetsk and Lugansk regions as of the beginning of 2014.

Putin said in a televised address on February 24 that in response to a request by the heads of the Donbass republics for assistance he had made a decision to carry out a special military operation in Ukraine. The DPR and the LPR launched an operation to liberate their territories under Kiev’s control.