Russia doesn’t care about ‘eyes of the West’ – Lavrov 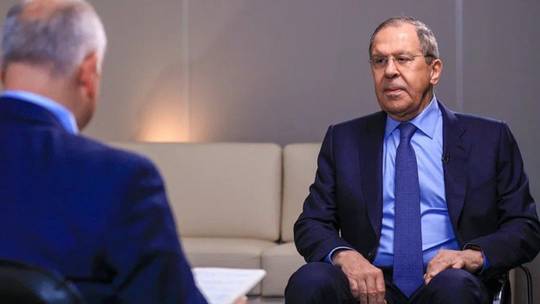 Russia doesn’t care about ‘eyes of the West’ – Lavrov

Moscow cares about international law, not what the West thinks, its foreign minister has told BBC.

The fate of British fighters captured in Ukraine and sentenced to death as mercenaries is for the Donetsk People’s Republic to decide under international law, and Russia doesn’t care how that looks “in the eyes of the West,” Foreign Minister Sergey Lavrov told UK state broadcaster BBC in an interview on Thursday, on the sidelines of the annual St. Petersburg International Economic Forum (SPIEF).

Two British nationals – Shaun Pinner and Aiden Aslin – were among a trio of foreign fighters found guilty of being mercenaries by the Supreme Court in Donetsk last week. They were sentenced to death, alongside Moroccan citizen Saadun Ibrahim.

When BBC’s Steve Rosenberg asked Lavrov about them on Thursday, the Russian foreign minister said this was a matter for the Donetsk People’s Republic (DPR), which Moscow recognizes as an independent state and an ally.

“In the eyes of the West, Russia is responsible for the fate of these people,” Rosenberg began, but Lavrov cut him off.

I am not at all interested in the ‘eyes of the West.’ I am only interested in international law, according to which mercenaries are not combatants. So what’s in your eyes doesn’t matter.

When Rosenberg protested that the two men were not mercenaries but had served in the Ukrainian military, Lavrov said that was a matter for the court – one as legitimate and as independent as the British courts.

Asked if the British government had reached out to Moscow about the fate of Aslin and Pinner, Lavrov said he hadn’t heard of such a request.

“They are used to doing everything in public. They began to declare that they were concerned about the fate of their subjects. I don’t know if they contacted us or not. They should talk to the DPR,” the foreign minister said.

Lavrov also told BBC that relations between Moscow and London were dismal and described Britain as “a country that once again tries to sacrifice the interests of its people for the ambitions of politicians, who only think about the next election and nothing else.”

British PM Boris Johnson, who just survived a no-confidence vote within his own party, arrived in Kiev on Friday to support Ukrainian President Volodymyr Zelensky.