Plant at least one tree to protect environment: PM 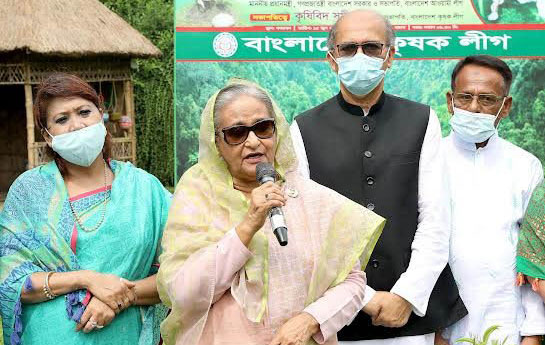 Plant at least one tree to protect environment: PM

Prime Minister and Awami League President Sheikh Hasina today said her party alongside the government has taken proper and timely measures to face adverse impact of the climate change, urging all to plant at least one tree to protect environment.

“I would like to urge all to plant at least one tree at places whatever you have and wherever you can. Those, who live in towns, can plant trees on rooftops or tubs on the balcony. Rooftop gardens can be made in the government offices,’’ she said.

She said this while inaugurating the three-month long tree plantation programme of Bangladesh Krishak League (BKL) at a function at her official Ganabhaban residence here.

The prime minister also reiterated her call to plant at least three saplings – fruit bearing, woody and medicinal- during the rainy season.

Sheikh Hasina said her party alongside the government has taken various programmes that included tree plantation to protect the country from the adverse impact of climate change as it always cares about the environment and the countrymen.

“The Sundarbans has been placed in the World Heritage list in 1998 due to the timely and proper measures taken by her government and the party,” she said.

Bangladesh is the only country in the world which formed a climate trust fund with its own finance and has been working to protect the country from climate change adversities, she continued.

The premier reaffirmed her call to the people to plant more trees to protect the environment, saying that saving the natural environment is a must.

“Keeping this in mind, our party Bangladesh Awami League has been planting trees since 1985 and we start the tree plantation campaign every year on the first day of Bengali month of Ashar,” she said.

In this regard, she mentioned creation of Jhauban (casuarina forest) in Cox’s Bazar coast saying Bangabandhu was the initiator of making the forest which is working as a shield to protect the tourist city during any severe cyclonic storm.

She called upon the leaders and workers of Awami League to take care of the nature and plant trees during the rainy season.

Since 1985, BKL, the peasant wing of Awami League, has been observing the tree plantation drive each year.

Sheikh Hasina extended her thanks to Krishak League for conducting tree plantation drives over the years and inspiring people for protection of nature.

Earlier, the prime minister inaugurated the sixth “Population and Housing Census-2022” that would be conducted across the country in a digital manner for the first time from today to June 21 to make it flawless and successful.