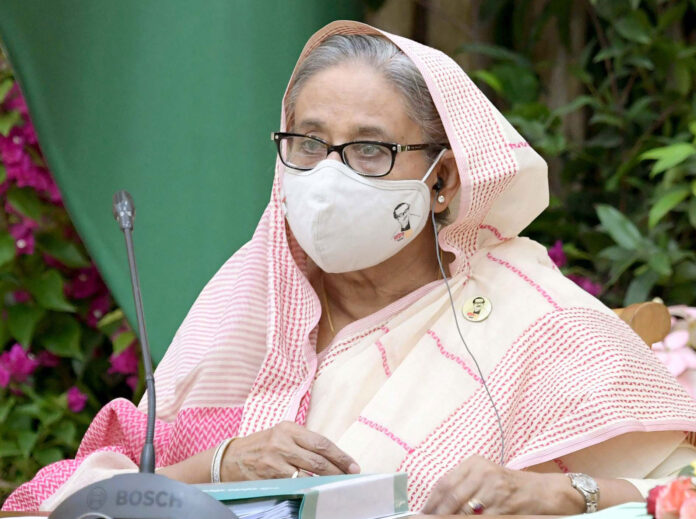 Prime Minister Sheikh Hasina today directed the authorities concerned to establish a museum on Padma Bridge at a suitable place in Bhanga as the Executive Committee of the National Economic Council (ECNEC) approved 10 projects involving around Taka 10,855.60 crore.

The premier presided over the 17th ECNEC meeting of the outgoing fiscal year (FY22) held at the NEC Conference Room in the city’s Sher-e-Bangla Nagar area.

Sheikh Hasina, also ECNEC Chairperson, joined the meeting virtually from her official Ganabhaban residence here as the ECNEC approved the projects including one for setting up Rajshahi Medical University (RMU) with Taka 1,867.08 crore.

Briefing reporters after the meeting, State Minister for Planning Dr Shamsul Alam said that out of the total project cost of Taka 10,855.60 crore, Taka 5,142.55 crore will come from the government of Bangladesh portion, Taka 756.30 crore will come from the organization’s own fund while the rest of Taka 4,956.75 crore as project assistance.
Of the approved 10 projects, six are new while four others are revised projects.

The state minister said the premier directed the authorities concerned to set up a museum on Padma Bridge at a suitable place in Bhanga considering the scenic beauty there as well as the connecting roads and flyovers centering the Padma Bridge.

Some instruments and equipments used for constructing the bridge would also be installed at the museum, he said.

He informed that the prime minister on the inauguration day of the bridge on June 25 would take photos with the workers associated with construction of the bridge alongside the concerned ministers, secretaries, other concerned officials and employees.

Terming the Padma Bridge as a structure of ‘national pride’ and it also reflects the indomitable courage of the prime minister as well as financial capability of the government, Dr Alam said that the overall cost of the bridge was not higher if the inflation is adjusted.

Recalling the background of fund withdrawal from the Bridge by the World Bank and other co-financiers like ADB, JICA, he said it was the premier who stood firm in her commitment to construct the bridge with own funding.

Besides, Dr Alam said apart from him, some eminent economists like Dr Abul Barakat, Dr Atiur Rahman also advocated for the government’s capacity to build the bridge with own funding although many apprehended that it was not possible to construct the bridge without foreign funding.

He said that the Padma Bridge was constructed with a rationale expenditure although the DPP of the project was revised for several times.

Answering to a question, Planning Commission Member Mamun Al Rashid informed that international standard rehabilitation was ensured during the implementation of the bridge with around Taka 12,000 crore while around Tk 12,000 were spent for the main structure of the bridge with less than Tk 2,000 expenditure for per kilometer.

The state minister said the prime minister also asked the authorities concerned to ensure underground utility lines like electricity in the cyclone and disaster prone areas.

Referring to the Dirai-Shalla portion of Madanpur-Dirai-Shalla-Jolshukha-Ajmiriganj district highway with Taka 628.54 crore, he said the prime minister approved the project on condition that bridges would be built in place of proposed culverts as those often hinders the usual flow of water and boats couldn’t move under the culverts.

Dr Alam said the prime minister asked the authorities concerned to build elevated roads in the Haor and low-lying areas so that those could have a life span of 70 to 80 years and to avert maintenance cost and misuse of fund.

He said that additional allocation for incorporating the provision for bridges instead of culverts would also be ensured.

The state minister said at the very outset of the meeting, the ECNEC thanked the premier and the finance minister for placing a time befitting Taka 6,78,064 crore proposed budget for the next fiscal year (FY23) in this challenging time especially prioritizing on controlling inflation.

The State Minister for Planning informed that the RADP implementation status during the July-May period of the current fiscal year is 7.2 percent or Taka 20,256 crore higher than the corresponding period of the previous fiscal year.

The other projects are – Modernization of Power Distribution Smart Grids, Phase 1 with Taka 1,067.24 crore, Mandir based children and mass education Programme (6th phase) with Taka 365 crore, and Modernization and Capacity Enhancement of BREB network (Dhaka-Mymensingh) with Taka 6,178.83 crore.