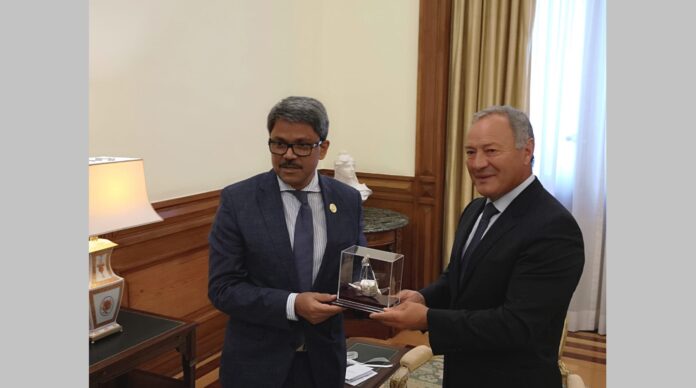 State Minister for Foreign Affairs Md. Shahriar Alam met with the Vice President of the Assembly of Republic of Portugal Adão José Fonseca Silva at the Parliament of Portugal in Lisbon yesterday.

During the talks, The State Minister proposed the formation of an Inter-Parliament Friendship Group as a forum to foster contacts and exchanges between the two Parliaments in the near future. The Vice President responded positively to the proposal and agreed to work on it.

To make Portuguese universities more accessible to Bangladeshi students, the State Minister urged him to encourage the government of Portugal to open an Embassy in Dhaka or offer periodic consular services in Dhaka from the Portuguese Embassy in New Delhi. The idea was welcomed by the Vice President of the Assembly.

The Vice President acknowledged the contribution of Bangladeshi expatriates in Portugal and the robust people-to-people ties existing between the countries. During the meeting, he also stressed for a high level participation from Bangladesh side for the upcoming Second UN Ocean Summit to be held from 27th June to 1st July in Portugal.

Earlier that day, the State Minister arrived in Lisbon on a four day official visit to Portugal. During this visit, Bangladesh State Minister is also scheduled to meet with Portugal’s Minister of Economy and Sea as well as Secretary of State for Foreign Affairs and Cooperation, apart from attending other engagements.