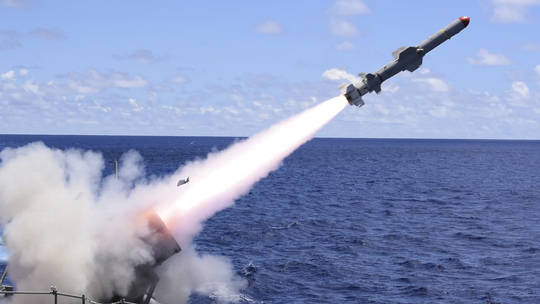 Denmark will give Kiev US-made Harpoon missiles, the Pentagon has confirmed.

Denmark will provide an unspecified number of Harpoon anti-ship missiles and launchers to Ukraine, US Defense Secretary Lloyd Austin announced on Monday. Last week’s rumors about the deliveries prompted Kiev to declare the US would help Ukraine “destroy” the Russian fleet, which the outgoing Pentagon spokesman denied.

Officially, the missiles are intended to help “defend the Ukrainian coastline,” according to Austin and Joint Chiefs Chairman General Mark Milley, who spoke with reporters after Monday’s virtual meeting of the Ukraine Defense Contact Group.

The panel – composed of 47 countries willing to supply Kiev with weapons – had a “highly constructive” meeting and got “a sharper sense” of Ukrainian needs from Defense Minister Alexey Reznikov and other Kiev officials, Austin said.

In addition to the Danish-supplied missiles, Czechia has pledged attack helicopters, tanks, and multiple rocket launcher systems (MLRS). Kiev has been asking for long-range artillery, tanks and armored vehicles, as well as drones, according to Austin.

Boeing’s A/U/RGM-84 Harpoon is the US Navy’s standard anti-ship missile, with an estimated range of about 300 kilometers. It has active radar guidance and skims the surface until it reaches the target, at which point it can execute a “pop-up” maneuver and strike from above. Harpoons are normally launched from either surface vessels or attack aircraft, but launchers can be removed from ships for use ashore – which appears to be what Denmark intends to do.

Last week, Reuters reported that the Pentagon was considering sending Ukraine either Harpoons or Naval Strike Missiles (NSM), directly or through a “European ally.” The agency cited “three US officials and two congressional sources,” all of them anonymous. They expressed hope that once the first country commits to sending Harpoons, others would follow.

According to Reuters, the NSM was regarded as “less logistically difficult” because NATO countries could send Ukraine the launchers and it only took 14 days to train operators how to use them – but it had a somewhat shorter range of 250 kilometers.

The story generated some controversy, however, when Ukrainian Interior Ministry adviser Anton Gerashchenko tweeted that the US was “preparing a plan to destroy the Black Sea Fleet,” referring to Russia’s naval force currently off the Ukrainian coast. Asked about this, Pentagon spokesman John Kirby told reporters he could “tell you definitively that that’s not true.” However, he did not deny that the US was considering sending Harpoons to Kiev.

On Monday, Austin confirmed that Kirby was leaving the Pentagon and moving to work at the White House’s national security council. Meanwhile, Gerashchenko’s tweet has been deleted.

The US has just committed another $40 billion in military aid to Kiev, including weapons shipments, despite fears by some European allies that this could draw NATO into a direct confrontation with Russia. Moscow has repeatedly warned the alliance that any shipments of weapons and supplies into Ukraine will be considered legitimate military targets. Russia has been carrying out air and cruise missile strikes against Ukrainian supply facilities.

Last month, the Pentagon claimed to have provided intelligence that helped Ukraine launch a missile attack against the Russian cruiser Moskva, flagship of the Black Sea Fleet. According to Kiev and Washington, the Ukrainians fired two Neptune missiles that struck the ship, which eventually sank. The Russian Navy said that Moskva was lost while being towed to port in stormy seas, after an ammunition explosion on board caused a fire.