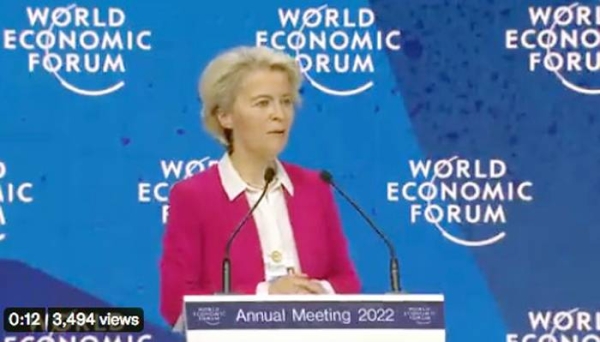 Ursula von der Leyen, President of the European Commission, denounced Russian aggression and its use of “hunger and grain to wield power”, in a special address at the World Economic Forum Annual Meeting 2022.

“Global cooperation is the antidote to Russia’s blackmail,” she said.

Her message focused on strategic priorities for Europe since the invasion. Boosting military spending is one such initiative. “We have to invest much more in solid European defence capabilities,” von der Leyen said. While NATO remains the world’s strongest military alliance, European spending on defence has not kept pace with recent increases by the United States, Russia or China, particularly since the 2008 financial crisis.

Increasing that spending – with a particular focus on the interoperability of nations’ defence investments – can help strengthen the region’s ability to defend itself from such threats.

She pointed to other key initiatives such as promoting green power, ensuring the resilience of supply chains and promoting food security. In terms of energy, she said, the crisis in Ukraine has galvanized Europe’s embrace of renewable sources and diversification of its energy supply.

Europe must respond to additional knock-on effects of the war, such as rising food prices, as Russia has confiscated Ukrainian grain and blockaded other food exports. Europe is helping by providing revenue, increasing its food production and supporting other regions such as Africa in becoming less dependent on food exports.

Technology can be a part of the solution to food insecurity to boost “climate-smart” agriculture. Vertical farming and precision irrigation are among the initiatives that can improve access to food in climate-responsible ways.

In a conversation with Klaus Schwab, Executive Chairman and Founder, World Economic Forum, von der Leyen noted that she could see a long-term future in which Russia found a path back to alignment with Europe.

“This brutal invasion is standing up against the leadership in Russia,” she said. The people of Russia, who ultimately will control the nation’s future, are the ones who will decide the nation’s way forward. If, in the future, the nation embraces “rule of law and respect for the international, rules-based order, it’s a clear yes”, she said.