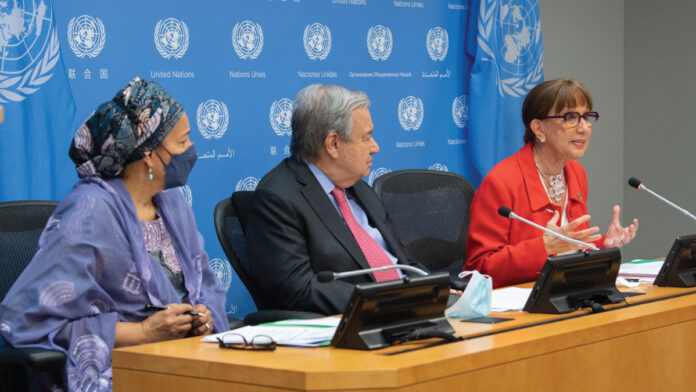 The world is on the brink of a “perfect storm” of crises, warns UN Secretary-General António Guterres. Dire consequences of the war on global food, energy and financial markets could upend billions of lives.

The war in Ukraine is setting in motion a three-dimensional crisis – on food, energy and finance – that is producing alarming cascading effects to a world economy already battered by COVID-19 and climate change, according to the new findings of the Global Crisis Response Group (GCRG) published on 13 April.

“We are now facing a perfect storm that threatens to devastate the economies of developing countries,” said UN Secretary-General António Guterres. “The people of Ukraine cannot bear the violence being inflicted on them. And the most vulnerable people around the globe cannot become collateral damage in yet another disaster for which they bear no responsibility.”

“Our world cannot afford this. We need to act now,” stressed the Secretary-General calling for urgent, concrete and coordinated action to help countries and communities most at risk avert the interlinked crises. “We can do something about this three-dimensional crisis. We have the capacity to cushion the blow.”

On the brink of a perfect storm

As two of the world’s breadbaskets, Russia and Ukraine provide around 30% of the wheat and barley we consume. Russia remains the world’s top natural gas exporter, second-largest oil exporter and a significant producer of fertilizers. The war has severely affected food, energy and financial markets, sending commodity prices to soar record high. Global economic growth is forecast to decrease by 1% in 2022.

Preliminary analysis suggests that as many as 1.7 billion people in 107 economies are exposed to at least one of three risks, mostly in Africa, Asia and the Pacific, and Latin America and the Caribbean. When combined with the already devastating impacts of the COVID-19 crisis and climate change, the exposure to just one risk is dire enough to cause debt distress, food shortages and blackouts.

Established by the Secretary-General, the GCRG aims to develop coordinated solutions to the interlinked crises in collaboration with governments, the multilateral system and sectors. The Steering Committee of the GCRG is chaired by UN Deputy Secretary-General Amina Mohammed.

The goal is to help vulnerable countries avert large-scale crises through high-level coordination and partnerships, urgent action, and access to critical data, analysis and policy recommendations. The development of today’s brief, the first in a series, was coordinated by the Secretary-General of the UN Conference on Trade and Development, Rebeca Grynspan.

“We must act today to prevent a food, fuel and finance crisis tipping the world into a new era of unrest,” Ms. Grynspan said.

The world needs to act with urgency

The brief proposes a series of immediate to longer-term recommendations to avert and respond to the triple crisis, including the need to keep markets and trade open to ensure the availability of food, agricultural inputs such as fertilizer  and energy. It also calls for international financial institutions to urgently release funding for the most at-risk countries while making sure there are enough resources to build long-term resilience to such shocks.

On food, beyond keeping markets open and ensuring that food is not subjected to export restrictions, the brief urges the prompt provision of funds for humanitarian food assistance. Food producers, who face higher input and transport costs, urgently need support for the next growing season.

On energy, it calls on governments to use strategic stockpiles and additional reserves to help to ease this energy crisis in the short term. More importantly, the world needs to accelerate the deployment of renewable energy, which is not impacted by market fluctuations, to phase-out coal and all other fossil fuels.

“Now is also the time to turn this crisis into an opportunity. We must work towards progressively phasing-out coal and other fossil fuels, and accelerating the deployment of renewable energy and a just transition,” added the Secretary-General.

On finance, the brief asks the international financial system, including G20 countries and development banks, to provide flexible, urgent, and sufficient funding for particularly least developed countries, and relief from debt servicing under current conditions.

“We need to pull developing countries back from the financial brink. The international financial system has deep pockets,” said the Secretary-General asking for funds to be made available to “economies that need them most so that governments can avoid default, provide social safety nets for the poorest and most vulnerable, and continue to make critical investments in sustainable development.”

The launch of the findings comes ahead of the 2022 Spring Meetings of the International Monetary Fund and the World Bank Group (18 to 24 April).