The Myth Bridge project is a co-creation project bringing together a group of Bangladeshi and German participants to “write” a modern day myth by playing out selected legendary heroines. The game will be played over the course of four-days in Dhaka and is based on Dungeons & Dragons.

The Myth Bridge connects nine female characters from German and Bengali folklore, brought to life, across space and time, through a live-action simulation.

The initiative involves a group of writers, illustrators, editors and translators and will result in a publication of the modern-day feminist myth and exhibition both in the digital and physical realms.

On Sunday, May 15 at 5pm the finale of the Myth Bridge game will be played to a live audience.

This is the first live Dungeons & Dragons game in Bangladesh and will conclude the campaign. The event is open to all upon registration on the FB event page. Players will act out the final act of the story – bringing their adventure to an end. For now.

In the following months the editors and creative director will work to create a short graphic novel out of the events of the 4-day game. The Myth Bridge will be published for the Dhaka Lit Fest in early 2023. 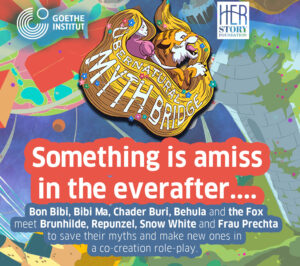 Salzar Rahman will play THE FOX

It is a fantastical universe where Rapunzel, Hercules, Bon Bibi and King Solomon could be having tea together. But it also opens up to more sinister scenarios. The Space in Myth Bridge is different from other universes, the stars are replaced with words and each world is encompassed in a dome or globe of glass, inhabiting its own space if it needs to.

Dungeons & Dragons is a tabletop role-playing game made all the way back in the 1970s. Players create or choose a character and go through a fantasy themed adventure where the game can stretch as far as the imagination can go. The deciding factor of the outcome of the game is up to the imagination and ingenuity of the players, and of course, their luck with the polyhedral dice.

In the Myth Bridge universe, our fated fairytale heroines have been framed for the destruction of the Castle of Ladyland, a utopian society inhabited by women.They are on the run and unable to go back to their homeworlds. Branded as criminals across the universe, they only have each other to rely on. They must overcome the continuous manifestation of malicious beings from Bangladeshi and Germanic myths and legends, to return back home.