PM urges parents to encourage their children to play outside 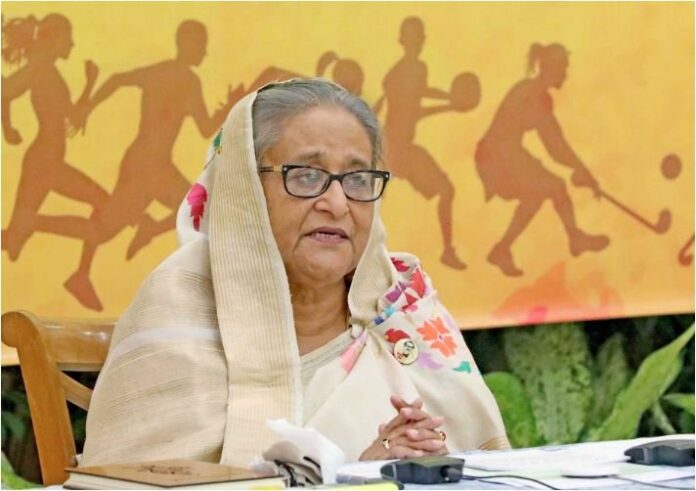 PM urges parents to encourage their children to play outside

Prime Minister Sheikh Hasina today asked all concerned particularly the parents to encourage their  children to play outside, which would help boost children’s physical and mental health alongside stoping their any kind of derailment.

“Most of our children are passing most of their times in flats engaging with mobile phones, laptops and ipads, which is an ominous  sign of their physical and mental health,” she said.

The Premier called upon the patents to take initiatives for taking their children outside home to play or run which is a must for their mental and physical wellbeing.

“I request all the guardians to be attentive regarding their children’s engagement in sports. Sports, running and jumping help boost all sorts of flourishment in terms of physical and mental health. And for that they will not be derailed, she said.

She said these while virtually distributing the “National Sports Award” to 85 sports persons and organisers from 2013-2021  in recognition to their gloriousdians  contribution to the country’s sports  arena as the  chief guest from her official  Ganabhaban residence here.

The Ministry of Youth and Sports organised the programme at the Osmani Memorial Auditorium.

The premier asked the authorities concerned to provide the award every year for encouraging players as well as organisers and for the overall progress of the sports.

On behalf of the Prime Minister, State Minister for for Youth and Sports Md Zahid Ahsan Russel,MP, handed over the awards among the reciepants .

Chairman of the ministry’s parliamentary standing committee Abdulla Al Islam Jacob was present while its Secretary Mesbah Uddin gave the address of welcome.

Earlier, the Ministry of Youth and Sports has nominated 85 sports persons and organisers for this  prestigious National Sports Award in recognitaion of thier contribution to the country’s sports during 2013 to 2020.

Each awardee will receive an 18-carat of gold medal weighing 25 grams, a cheque of Taka one lakh and a certificate.

Father of the Nation Bangabandhu Sheikh Mujibur Rahman’s second son Shaheed Lt. Sheikh Jamal was given the award (posthumous) as player and organiser for the year 2020.