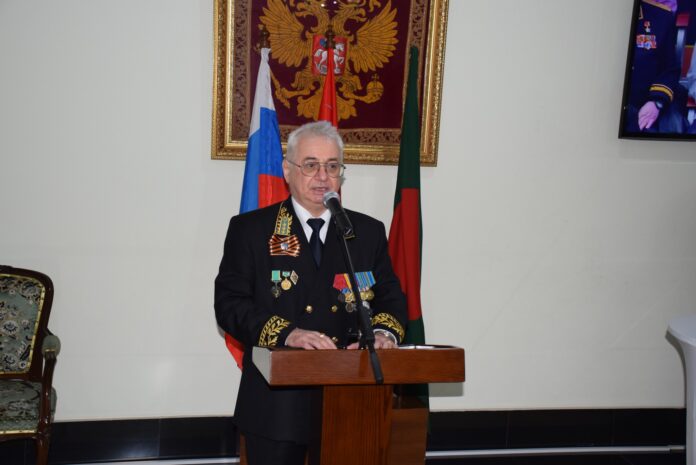 May 9 was the 77th anniversary of Victory in the Great Patriotic War.

On May 9, Russia celebrates one of its main holidays – Victory Day, which marks the victory of the Soviet Union over Nazi Germany in the Great Patriotic War (a part of World War II) in 1945, during which around 27 million Soviet citizens gave their lives.

Embassy of Russian Federation in Bangladesh had organised a celebration ceremony in this connection at the Russian Club in the city on Monday evening with the participation of the Russian House in Dhaka, hosted a solemn reception dedicated to the 77th anniversary of the Victory in the Great Patriotic War.

The head of the diplomatic mission, HE A.V. Mantytskiy, in his speech, reminded the audience about the decisive role of the Soviet Union in freeing the whole world from the brown plague and about the high price that had to be paid for this. He urged not to forget the lessons of history and prevent the revival of Nazism.

Representatives of the Bengali establishment, the diplomatic corps, as well as compatriots and graduates of Soviet / Russian universities, who attended the program, expressed gratitude to Russia for the victory over fascism in that terrible war. 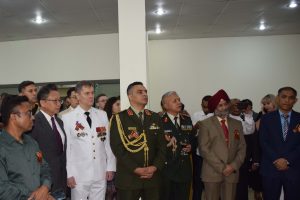 In order to honor the memory of these people the Embassy joined the action “the Immortal Regiment”, held annually in Russia and around the world, to commemorate the relatives of the Embassy staff and their family members as well as the Russian compatriots in Bangladesh, said a release by the Embassy of Russian Federation in Bangladesh .

Military parade  held on Red Square in Moscow to commemorate the 77th anniversary of Victory in the Great Patriotic War of 1941-1945.

11,000 servicemen took part in the military parade. This year’s foot column is made up of 33 parade units. It consists of officers, sergeants and soldiers of formations and military units, students and cadets of military educational institutions, pupils of Suvorov and Nakhimov military schools, cadet corps and participants of the All-Russian Yunarmiya movement, as well as representatives of other security agencies of the Federal Security Service, the National Guard Service and the All-Russian Cossack Society. 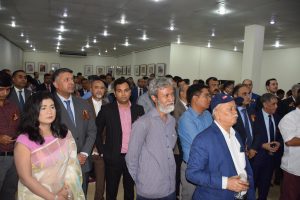 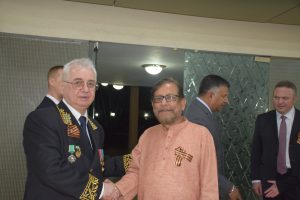 In the evening at 22.00, artillery fireworks took place in Moscow.
The people of Russia and other nations celebrate the 77th anniversary of Victory of the USSR in the Great Patriotic War.
The Soviet citizens, among whose 27 millions sacrificed their lives, played a crucial role in defeating Nazi Germany and, together with the Allies, liberated Europe from the fascist plague.
This victory saved the Soviet Union’s and other counties’ nations, persecuted by the barbaric Nazi ideology, from the extermination.
Unfortunately, today there is a trend to diminish the role of the USSR in World War II. Some politicians spread propagandist narratives, which claim that the decisive contribution to the victory was made by the Western Allies, thus fading into the background the feat of our heroes and distorting the historical truth. 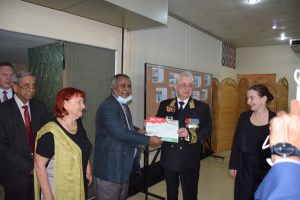 It is regrettable to witness Nazi glorification today: the Nazi Germany-styled torchlight processions in some countries, installing the monuments in honor of the henchmen of this ideology. At the same time the memorials and graves of the Soviet warriors are destroyed and vandalized. Another alarming sign is the refusal of some members of international community to vote for the UN General Assembly resolution on the inadmissibility of glorifying Nazism in all its forms, which is being annually promoted by Russia.
In this regard the consistent support of the Government of Bangladesh to this document is quite valuable, as it expresses the country’s commitment to confront the inhumane and imperialistic ideologies.
The memory of people who fell on the battlefield, fighting the enemies of the Motherland and civilization, will be alive, as all our generations commend this great holiday.
Share
Facebook
Twitter
Pinterest
WhatsApp
Previous articleBangladesh’s economy may reach uncomfortable zone during fiscal 24 -25 : economist
Next articleসাত কারণে বাড়ছে তেলের দাম