Bangladesh stands out in economic progress 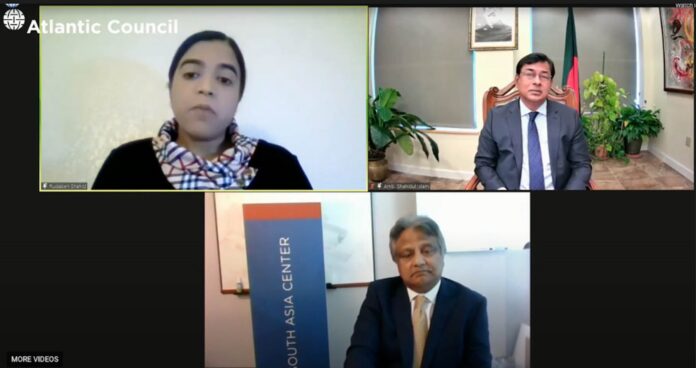 Bangladesh stands out in economic progress

At a Webinar in Washington, D.C. speakers praised the impressive economic growth that Bangladesh has registered in recent years despite various challenges, including the COVID-19 pandemic and the Rohingya crisis.

The Webinar titled ‘Bangladeshi perspectives on regional economic cooperation’ organized by the leading U.S think tank Atlantic Council on yesterday, in partnership with the Bangladesh Embassy in Washington, D.C.

Bangladesh Ambassador to the United States M Shahidul Islam delivered a keynote speech on the theme of the event and took part in a moderated discussion and a Q&A session. Senior advisor of Atlantic Council’s South Asia Center and former U.S Ambassador to Fiji, Osman Siddique, moderated the event.

Ambassador M Shahidul Islam, in his remarks, stated about the Bangladesh Prime Minister Sheikh Hasina’s vision for transforming the country into a connectivity hub in South Asia to foster economic cooperation and people to people contact in the region. He also highlighted Bangladesh’s proactive role to support cooperation among the regional countries in areas such as power and energy, COVID-19 collaboration, and climate change. The Ambassador also shared his thoughts about the possible role and relevance of the U.S to promote economic integration of South Asia.

During the Q&A, Ambassador Shahidul Islam responded to questions from the Moderator and the audience about Bangladesh perspectives on QUAD, RCEP, free-trade zone among the Asian countries, sharing of Teesta water, and border killings in the Bangladesh-India border, among others. In this regard, he also stated that Bangladesh maintains friendly relations with all countries of the world, including its neighbors, and believes in resolving any bilateral issues through dialogues and negotiations. During the discussion, the Ambassador termed the Rohingya crisis as a big challenge for the region that has stood in the way of greater integration of South and Southeast Asian economies.