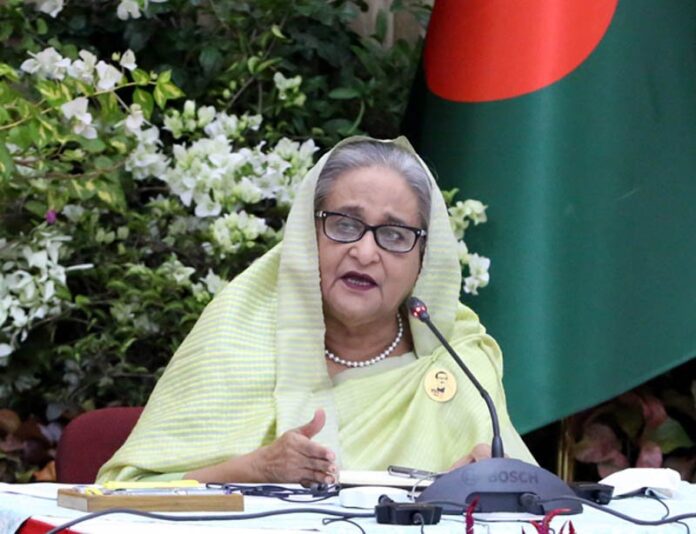 Prime Minister Sheikh Hasina today revealed that the government has made arrangements to procure 25 crore doses of Covid-19 jabs.

“Nobody in the country will be excluded from Covid-19 inoculation,” she said at a press conference organized at her official residence Ganabhaban about her recently-concluded visit to the United Kingdom and France.

She said the government has started administering Covid-19 jab to slum people and students.

Sheikh Hasina said nearly 9 crore doses of jabs have already been administered, of which 4.5 crore is double doses while the remaining is single dose.

“All Covid-19 vaccines are being given free of cost by the government,” she said, adding, “A jab costs a good amount of money.”

The Premier urged the people to keep it in their mind.

On the other hand, during her recent visit to France, she said the country under the COVAX facility has announced to provide another 20 lakh COVID-19 jabs to Bangladesh.

During the visit to Paris, a letter of intent (LoI) on defense cooperation was signed between Bangladesh and France.

“Through this, we have agreed to arrange training and exchange potential defense technology to enhance the capabilities of our armed forces,” she said.

Regarding the LoI, the Premier said she didn’t discuss about equipment sell and buy, rather the issue of technology transfer was also prioritized.

Mentioning that now no single country makes any finished product, she said different parts are being made in different countries and later assemble those as a finished product. “So, it’s all right that I will buy but at the same time we want to ensure the transfer of technology to the country,” she added.

In addition to this, three separate agreements were signed to get 200 million euros in COVID-19 management, 130 million euros for sustainable water supply management projects and technical assistance and training in the aviation sector.

Referring to the ‘UNESCO-Bangladesh Bangabandhu Sheikh Mujibur Rahman International Prize in Creative Economy’, Sheikh Hasina urged the young people of the country to prepare themselves and become entrepreneurs so that they can win this award in future.

UNESCO, an organization of 193 UN member states and 11 associate members, introduced this prize and the MoTIV Creations Limited, a private organization of Uganda, won the maiden award.