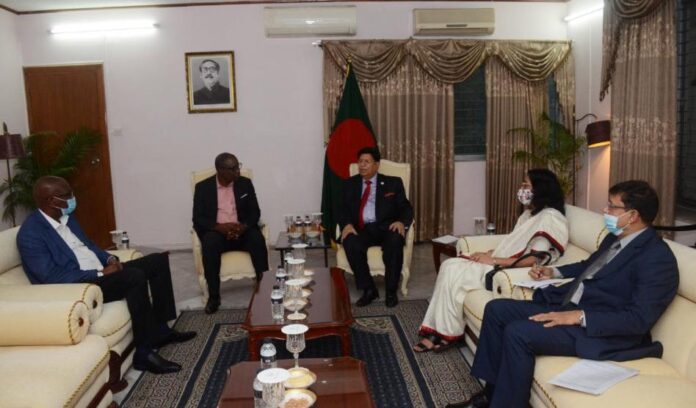 Both the Ministers are visiting Dhaka for participating at 21st Indian Ocean Rim Association (IORA) Council of Ministers and related meetings.

Foreign Minister Dr. A. K. Momen narrated the development march of Bangladesh to the visiting Ministers. He mentioned that under the visionary leadership of father of the nation Bangabandhu Sheikh Mujibur Rahman, Bangladesh has attained remarkable socio-economic development. He thanked Tanzanian government for supporting Bangladesh Chairship at Indian Ocean Rim Association.

Momen commented that Bangladesh believes in economic growth and prosperity for all. He told that Bangladesh has attained remarkable success in many areas including creative economy for which UNESCO has conferred The UNESCO-Bangladesh Bangabandhu Sheikh Mujibur Rahman International Prize to Bangladesh.

Foreign Minister hailed Tanzania for their elevation to a middle-income country. He also added that Bangladesh believes in multilateralism. Dr. Momen also mentioned that under the prudent leadership of Prime Minister Sheikh Hasina, Bangladesh has been able to achieve tremendous success in agriculture and socio-economic areas.

During the meeting both side agreed to cooperate in different sectors of agriculture including fisheries, livestock, horticulture and aquaculture.

Both sides also highlighted the importance of exchange of business delegation to develop trade and economy. Foreign Minister sought cooperation of the Tanzanian government for solution of the Rohingya crisis. They agreed to establish cooperation in agriculture, blue economy and other economic sectors through establishing official contacts.