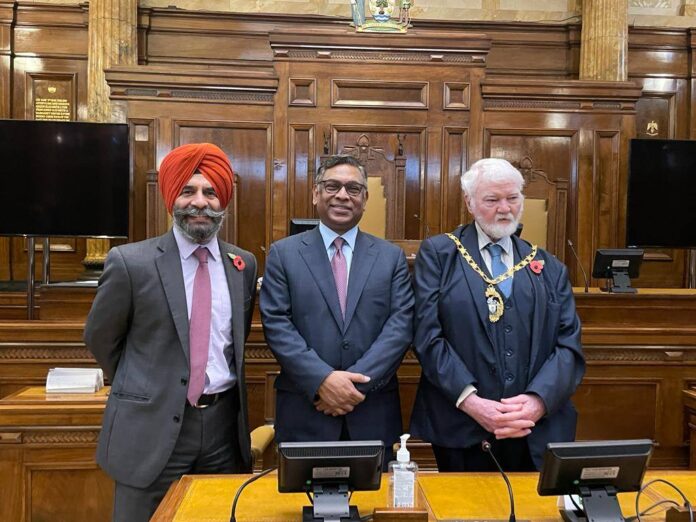 He was accompanied by Fahim Razzak, MP, also member of the Parliament Standing Committee on Foreign Affairs, as a special guest and two senior journalists Mahfuz Mishu and Ishrat Jahan Urmi from the Bangladesh delegation at the United Nation’s COP26 Summit, Glasgow, said a press release.

The group was welcomed to the Town Hall by the Mayor and Leader of the Council Cllr Jas Athwal followed by a citizen engagement session at the council chambers.

Nasrul Hamid spoke on the impact of climate change on Bangladesh as one of the worst affected countries by global warming and the much-needed action from the responsible countries to tackle these damages as well as safeguarding environment.

He highlighted Bangladesh’s journey towards clean and green energy sector and the challenges faced being a densely populated country.

Nasrul Hamid paid tribute to the overwhelming support of the British people during Bangladesh’s struggle for independence.

He also emphasized the importance of continued engagement from the British Bangladeshis and exploring ways to strengthen the relationship.

The Leader of the Council Cllr Jas Athwal shared his personal story from an immigrant child to becoming the leader of one of the most diverse boroughs in the country.

Cllr Athwal passionately spoke about the need of creating equal opportunities for all communities and Redbridge Council’s success in promoting inclusion.

Nahim Razzak talked about his experience as a young MP and fondly recalled his connection with the borough where he resided a few years during his studies. He mentioned the role of young people in politics and beyond.

The event was hosted by Cllr Saima Ahmed, the Women’s Champion of Redbridge.

The Mayor of Redbridge thanked the international guests for taking the time to visit the Borough and presented mementos from the council.

Due to the Covid-19 restrictions, a limited number of British Bangladeshi residents attended the event and asked questions to the chief guest about climate emergency funds, the sustainable plan to move forward and how energy can be produced without impacting the environment.