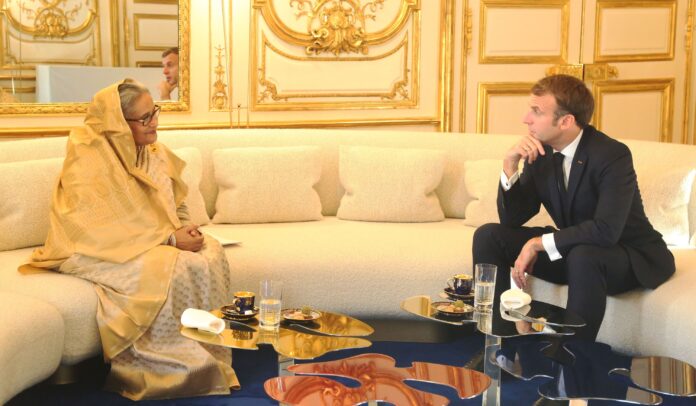 1. At the invitation of the President of the French Republic, Emmanuel Macron, the Prime Minister of Bangladesh, H.E. Ms Sheikh Hasina is making an official visit to France from 9 November 2021.

The high-level discussions covered, among other issues, upgrading of bilateral relations, the 50th anniversary of the establishment of diplomatic relations which both countries will celebrate next year and major international and regional issues.

Both sides recalled the historic leadership of Bangabandhu Sheikh Mujibur Rahman, and Bangladesh acknowledged the valuable support of the government and people of the Republic of France during the War of Liberation in 1971.

2. Bangladesh and France welcomed the growth of their friendship, and highlighted their shared will to develop and deepen all aspects of their partnership through regular political consultations for strategic guidance. Both countries reiterated their determination to enhance cooperation in all areas, including politics and diplomacy, defence and security, trade and investment, sustainable development and climate change, and education and cultural exchange. Both countries also recognized the importance of sustained and substantive cooperation in relevant regional and multilateral fora.

3. Bangladesh and France stated their will to further develop the defence and security component of their partnership. To that end, both countries agreed to strengthen dialogue and continue their cooperation, in particular the area of training, which was launched during this visit. Furthermore, they committed to stepping up cooperation in the area of defense equipment based on the needs expressed and each party’s ability to respond to them, including through capacity building and potential technology transfer. In this regard, both parties welcomed the signing a Letter of intent on defence cooperation.

4. Bangladesh and France shared the same vision for a free, open, peaceful, secure and inclusive Indo-Pacific region, based on international law and with shared prosperity for all. Taking note of the French and European strategies concerning the Indo-Pacific, both parties agreed to work towards promoting regional peace and stability and to explore further opportunities for cooperation in maritime security and blue economy. Highlighting their commitment to fully observing the 1982 United Nations Convention on the Law of the Sea as well as the peaceful settlement of disputes, refraining from any threat or use of force, they stated the importance of maintaining security and freedom of navigation and overflight in all seas and oceans.

5. Bangladesh and France once again reaffirmed that terrorism, in all its forms and manifestations, is one of the most serious threats to global peace and security and that all terrorist acts are criminal and unjustifiable. Both countries, therefore, jointly express their support for counter-terrorism efforts and agreed to enhance their cooperation, including under the aegis of the United Nations.

6. Furthermore, Bangladesh and France would like to increase their cooperation and dialogue with a view to actively contributing to strengthening connectivity in South Asia in order to facilitate exchanges between Europe and Asia and promote sustainable and inclusive economic growth. Welcoming the work of the Asia-Europe Meeting (ASEM) on connectivity as well as the European approach to global connectivity, both countries stressed the importance of continuing economic projects based on the principles of fair competition, transparency, economic, financial, environmental and social sustainability and mutual benefit, taking into account the principles, objectives and targets of the 2030 Sustainable Development Agenda and relevant G20 documents.

7. France complimented Bangladesh on being recommended by the United Nations to graduate from the Least Developed Country category in 2026. Acknowledging Bangladesh’s submission of the National Plan of Action on the Labour Sector to the European Union, France stressed the need for its comprehensive implementation and encouraged Bangladesh to pursue its export-led growth and economic diversification, including by leveraging the appropriate trade preferences under the European Union’s GSP Regulations. Furthermore, both countries
underlined their commitment to liberalizing and facilitating trade and investment and their commitment to the role of the World Trade Organization. They expressed their wish to strengthen their cooperation in order to improve the global governance mechanism and stimulate sustainable economic recovery and growth from the COVID-19 pandemic.

8. Both countries expressed their determination to strengthen economic, trade and investment cooperation and to continue their shared efforts to improve market access for their respective companies. They reaffirmed their desire to strengthen long-term economic and industrial partnerships, including in the sectors of agriculture, infrastructure, transport, energy and digital technology. Taking into account the priorities expressed by Bangladesh to develop the aeronautic and aerospace sectors, both counties expressed their support to a closer cooperation and new opportunities in these sectors. France took note of Bangladesh’s pursuit of a knowledge-based economy and both sides agreed to explore enhanced cooperation in science, technology and innovation.

9. Bangladesh and France reiterated the central role of the United Nations in international peace and security, and highlighted the importance of promoting and protecting human rights and fundamental freedoms in accordance with the goals and principles of the Charter of the United Nations. Bangladesh, which is one of the main contributors to United Nations peacekeeping operations, and France, which also contributes to PKOs, agreed to maintain their cooperation in this area, including in specific francophone contexts. Both countries recalled their commitment to the objectives and principles pursued by all United Nations agencies, including UNESCO, a forum in which both countries actively cooperate.

10. France welcomed Bangladesh’s generosity in providing shelter to the Rohingyas, who were forced to flee violence of Myanmar security forces in their home country. Bangladesh and France noted the significant pressure caused by the Rohingya crisis on Bangladesh, particularly for communities living adjacent to the camps. Both countries underscored the need to ensure funding for the UN’s Joint Response Plan for the Rohingya in Bangladesh and enable their voluntary, safe, dignified and sustainable return to Myanmar as soon as possible. In this regard, Bangladesh highlighted the potential security risks from the crisis for the region, and urged the international community to play a constructive role to resolve the crisis.

11. Both countries welcomed the French Development Agency (AFD)’s long-term partnership with Bangladesh. Through the activities of the AFD and in response to Bangladesh’s national development strategies, France is committed to continuing support for Bangladesh’s health system as well as for the blue economy, energy and water sectors. Both sides welcomed the signing of the Credit Facility Agreements on health systems strengthening and water treatment plant.

12. Following COP26 in Glasgow, Bangladesh and France reaffirmed their shared determination to strengthen cooperation for the environment, the fight against climate change and the promotion of sustainable growth, as part of the overall 2030 Agenda. France commended Bangladesh’s leadership of the Climate Vulnerable Forum and both sides agreed to work towards securing climate financing committed under the Paris Climate Agreement.

13. Bangladesh and France agreed to facilitate scientific and academic research through collaboration and exchange at the institutional level. France further agreed to offer specialized courses for diplomatic and military professionals of Bangladesh in relevant French institutions. Both countries also stated their desire to promote the use of the French language in Bangladesh and the Bangla language in France, and would like to support the role of the Alliances Françaises in Dhaka and Chittagong.

14. Both parties are convinced that this visit will turn a new chapter in further strengthening the bilateral partnership between Bangladesh and France.