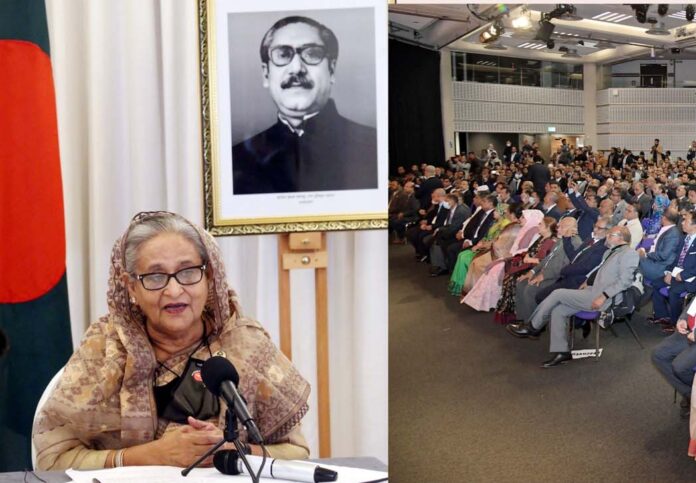 Prime Minister Sheikh Hasina has raised
questions over BNP’s existence as political party in future as its top
leadership was convicted for their involvement with illegal activities.

“How a political party will exist when a fugitive, who is convicted in
arms smuggling, August 21 grenade attack, siphoning off orphans money cases,
is in its leadership,” she questioned.

The premier was addressing a civic reception accorded to her by the
expatriate Bangladeshis in the United Kingdom (UK) at Queen Elizabeth Center
here on Sunday afternoon (UK time).

Joining virtually the event from her place of residence in London, she
said the top leadership of the party is also convicted in murder, arms
smuggling and corruption cases as well.

“Not by us (government), this corruption perpetrated by the sons of Begum
Khaleda Zia has been dug out by the American FBI . . .,” she said, adding “We
(government) have been able to bring back some smuggled money from abroad.”

Sheikh Hasina, also the President of ruling Awami League, said they
(Khaleda Zia and her sons) do not have any patriotism, rather they think
power is a tool of enjoyment and a place for looting.

She also questioned about Tarique Rahman’s lavish life in London and
source of income.

She said when BNP (Khaleda Zia) came to power in 2001, it made Bangladesh
champion in corruption for five times, established a reign of looting, opened
Hawa Bhaban and started eating and drinking, ruining the education of the
country’s people.

“Normally, people move forward, but I have never seen people move
backward. That’s what they showed,” she added.

The head of the government said the people of Bangladesh plunged into the
era of darkness after the assassination of Father of the Nation Bangabandhu
Sheikh Mujibur Rahman.

Sheikh Hasina added, “But when Awami League came to the power, people
started to get services from the government.”

The wheel of fate of the country began to move towards prosperity, when
Awami League formed government in 1996 after 21 years, she said, adding,
“Awami League always stands beside the people and thinks about the welfare of
the people.”

Mentioning that Bangladesh doesn’t live with alms as today’s Bangladesh has
learned to stand on its own feet she said, “Ninety percent financing of our
development projects comes from our own resources and we have attained that
capability”.

Talking about Padma Bridge, Sheikh Hasina said vested quarters tried to
stigmatize the government, especially her (the prime minister) and her family
members by raising accusation of corruption against them.

“But, I threw a challenge to the World Bank, and they failed to prove,
there was no corruption in Padma Bridge,” she said.

The premier said Awami League does not come to the power to do corruption
and make their own fate, adding, “We are here to build the fate of the
people, which is our aim, and we are working to materialize that goal.”

She urged the expatriate Bangladeshis to come with investments in the 100
economic zones that are being built across the country.

“If you (expatriates) want to invest you will get special facilities, we
will do that,” she said.

She continued that the government has taken steps to solve the problems of
expatriates.

Sheikh Hasina called upon the expatriates to inform her about their
difficulties if they face any to invest in the country, and assured them that
she will resolve every problem.

She went on saying that the government will pave the way so Bangladeshis
also could invest in other countries.

She said, “My father has liberated this country from the Pakistan and I
know how to foster the development of Bangladesh”.

Each time (during coup), thousands of officers and soldiers of the Armed
Forces were killed brutally by Ziaur Rahman, she said, adding, “Actually,
November 7 is Soldier killing Day.”