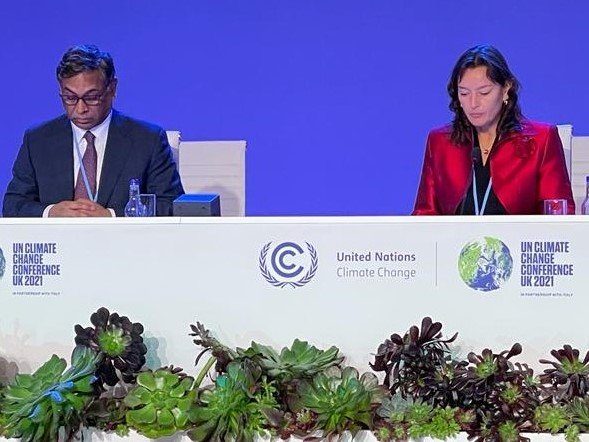 State Minister for Power, Energy and Mineral Resources Nasrul Hamid today said adopted strategies would expedite use of clean and renewable energy alongside its expansion and diversification.

“In Bangladesh, adopted strategies would expand renewable energy by playing an effective role to diversify the use of clean energy,” said while addressing COP26 Energy Transition Council (COP26 ETC) Ministerial Event in Glasgow, according to a message received here today.

Nasrul said that the advanced technology, research and financial coordination are needed to ensure massive expansion of renewable energy, adding, “Increase capacity must be required through working together.”

He said that Bangladesh wants to work together with the Energy Transition Council and all concerned for expansion of clean energy.

“The installed capacity of country’s lone hydropower plant established in early 1960’s is 230MW. Due to flat terrain, prospect of utility scale is limited here. Dialogue is underway with neighbouring Nepal and Bhutan for hydropower potentiality,” the state minister said.

He said that Bangladesh has moved away from implementing 10 coal-based power plant projects worth of approximately $10 billion investment, adding, “This is a milestone step towards our journey to green and clean energy. However, evidently, such step has cost us this huge amount of investment opportunity.”

Nasrul urged the COP26 ETC for facilitating investment in power sector with a view to counterbalancing the investment deficiency in Bangladesh.

“We have to work with solar home system and solar mini grid projects, as two crore rural people were brought under power coverage through 60 lakh solar home systems. It is necessary for technology, which will need less land for solar power. Large scale solar power plant is difficult for densely populated countries like Bangladesh,” he said.

Nasrul also said that biomass energy is the primary source of energy in Bangladesh.

“Under the leadership of Prime Minister Sheikh Hasina (now the Chair of Climate Vulnerable Forum (CVF) we are extremely positive about clean energy. We aspire to increase share of renewable energy to an optimistic 40% by the year 2041. Bangladesh has made all out efforts to scale up renewable energy in fulfillment of the commitment articulated in SDG7,” he added.

The state minister said that the number of biogas plants is close to a million and Cooperation of Energy Transition will be welcomed for research to generate power from waste, wind and ocean etc and the government is also working on importing clean fuel.

Tapping the moderate solar energy resources, Bangladesh has been able to develop world’s largest solar power dissemination program with installation of around six million solar home systems that meet basic electricity needs of more than 20 million people which is larger than the population of Sweden, Denmark and Finland combined, he said.

Chaired by Elizabeth Press, director of International Renewable Energy Agency (IRENA), the programme was also addressed, among others, by European Union Commissioner Kadri Simpson and Ministers from ETC focus countries.