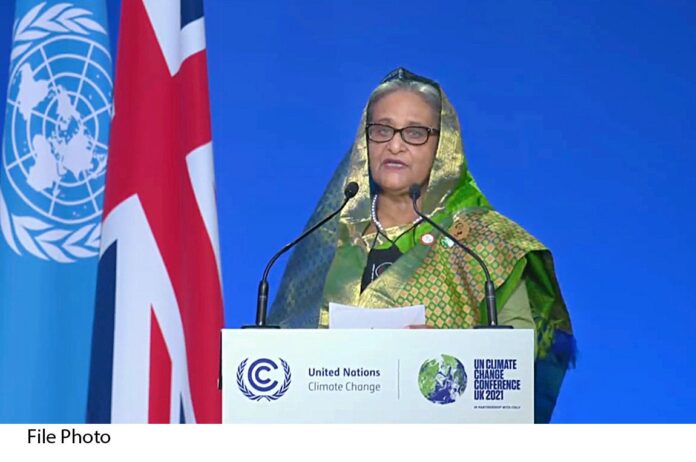 A BBC report has said that the outcomes of the COP26 Summit depend on Bangladeshi Prime Minister Sheikh Hasina and four other such influential dealmakers, who have been tasked with committing the 197 countries to the changes.

The report said: “The success or failure of the summit depends on these five negotiators, who have a major influence on the outcome.”

This is mainly because the countries not only have varying national priorities, but nations forge alliances with each other and form negotiating blocs even within the dialogue. Hence, countries can be part of different negotiating groups simultaneously, said the report.

The Bangladesh PM represents the Climate Vulnerable Forum, a group of 48 countries who would be the worst sufferers of climate change.

Sheikh Hasina is the mouthpiece of those who experience climate change firsthand to the COP. Last year, about one-fourth of Bangladesh was hit by floods, leaving millions inundated, the BBC report said.

When it comes to negotiations, the Climate Vulnerable Forum and the Least Developed Countries group have had a strong track record, despite not being so economically well-off.

“These countries punch above their economic weight, so to speak,” said Dr Allan.

“Because they are a strong moral voice, and because decisions are taken by consensus, they have been able to get a good deal of progressive decisions through the UN machinery,” she added.

Bangladeshi negotiator Quamrul Chowdhury, who belongs to Sheikh Hasina’s negotiation team, when talking to BBC, said the vulnerable nations are coming to Glasgow with a clear set of goals.

“There are over one billion people now on the hook of adverse climate impacts,” he told BBC. “We want to get them off the hook by getting the richest countries to steeply cut back emissions, to fix the outstanding Paris rules, to ramp up climate finance and to address loss and damage”, he added.

China’s veteran climate negotiator Xie Zhenhua had a close working partnership with the US climate ambassador Senator John Kerry. Their relationship was crucial in building the 2015 Paris agreement, which made countries commit to reduce emissions.

China’s importance lies in its size, being the world’s biggest emitter of carbon dioxide — and at COP26 it is a key member of several negotiating blocs.

Many Arab countries and developing nations follow the lead of Saudi Arabia. A successful outcome will not be possible in the COP26, without their agreement.

Formerly an employee of state oil company Saudi Aramco, in the last decade, Saudi Arabia’s Ayman Shasly has been chairman of the Arab group of climate negotiators.

The man tasked with bringing the COP26 talks to a successful conclusion is British minister Alok Sharma. Serving as President for COP26, his words and actions would be subject to intense scrutiny.

Spain’s minister for the ecological transition Teresa Ribera has been involved in the UN climate negotiations process for decades.

During her time in the government, she has helped oversee Spain’s transition away from coal, which has been hailed as a model for countries to make the move to renewables without eliminating jobs.