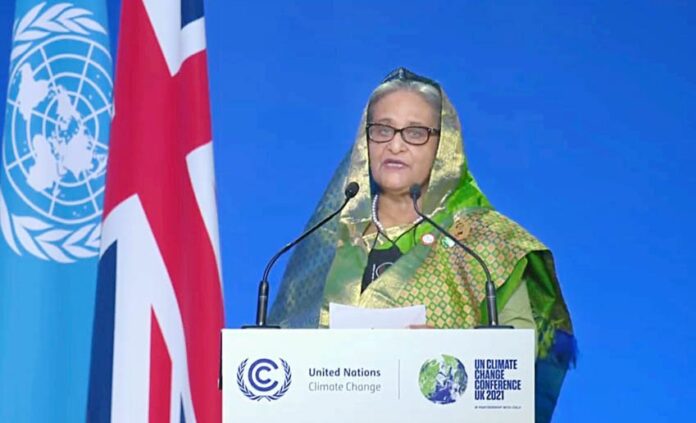 Prime Minister Sheikh Hasina on Monday urged the developed countries to submit their Nationally Determined Contributions (NDCs) in line with their obligations under the 2015 Paris Agreement and implement those to cut carbon emissions to negate climate change impacts.

“The major emitters must submit ambitious NDCs, and implement those,” she said in her first proposal, out of four, while giving the national statement at the 26th Session of the Conference of the Parties (COP26) joined by some 120 leaders of developed and developing countries.

She said compromising its development needs Bangladesh updated its NDC, scrapping 10 coal-based power plants projects involving US$12 billion foreign investment and setting a roadmap to have 40 percent of the country’s energy from renewable sources by 2041 alongside various other measures.

The UK is hosting the COP26, from October 31 to November 12, with heads of state, delegates and campaigners all set to negotiate a coordinated response to the climate emergency under the United Nations Framework Convention on Climate Change (UNFCCC) at Plenary-2, Pen Y Fan in Scotland of the UK.

Sheikh Hasina, also chair of the 48-nation Climate Vulnerable Forum (CVF) and V20 (The Vulnerable20), demanded developed countries fulfill their commitments of providing US$100 billion annually with a 50:50 balance between adaptation and mitigation.

“The issue of loss and damage must be addressed, including global sharing of responsibility for climate migrants displaced by sea-level rise, salinity increase, river erosion, floods, and draughts,” she said in her fourth proposal.

Sheikh Hasina told the summit that contributing less than 0.47 percent of global emissions Bangladesh was one of the most climate-vulnerable countries while it established the “Bangladesh Climate Change Trust Fund” in 2009 and doubled climate-related expenses in the last seven years.

“Currently, we are preparing the National Adaptation Plan,” she said spelling out various measures taken by her government to face climate change.

The premier said Bangladesh has one of the world’s most extensive domestic solar energy programmes and “we hope to have 40 percent of our energy from renewable sources by 2041. We have cancelled 10 coal-based power plants worth 12 billion dollars of foreign investment”.

The Prime Minister said her government is going to implement the “Mujib Climate Prosperity Plan”, a journey from climate vulnerability to resilience to climate prosperity.

“We are also trying to address the challenge of climate impact because of 1.1 million forcibly displaced Myanmar nationals or Rohingyas,” she told the conference.

Sheikh Hasina said being the chair of the Climate Vulnerable Forum (CVF) and V20, Bangladesh was promoting interests of the 48 climate-vulnerable countries as well and “we are also sharing best practices and adaptation knowledge regionally through the South Asia Office of the Global Center of Adaptation”.

On behalf of the CVF, Bangladesh is pursuing to establish a Climate Emergency Pact, she added.