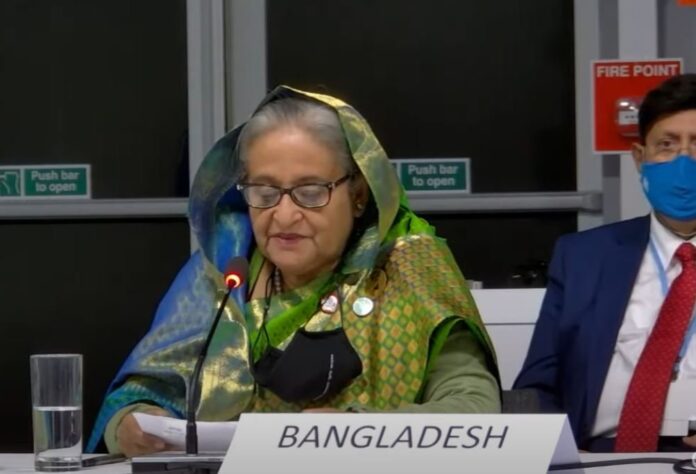 yesterday said the global adaptation actions are not being effective due to
lack of finance and strong political will.

“To address this, developed countries must fulfill their commitment of
annual $100 billion climate finance with 50:50 allocations for adaptation and
mitigation,” she said, addressing the Leaders’ Meeting on “Action and
Solidarity – The Critical Decade” at the COP26 venue here.

The premier further said that the developed nations also need to support
vulnerable countries by transferring green and clean technologies at
affordable cost.

As the President of the (Climate Vulnerable Forum) CVF and the host to the
South Asian office of Global Centre on Adaptation, Sheikh Hasina said
Bangladesh is promoting locally-led adaptation in different countries of the
world.

She said despite being a climate vulnerable country, Bangladesh is a global
pioneer on adaptation and mitigation initiatives and resilience.

“In addition, Bangladesh is planting 30 million saplings this year, and is
going to launch the “Mujib Climate Prosperity Plan” named after the Father of
the Nation Bangabandhu Sheikh Mujibur Rahman to guide the country’s
development trajectory to a strategic low-carbon pathway,” the premier
informed the global leaders.

In addition, the premier said, Bangladesh has also drafted National
Adaptation Plan with significant enhancement of its adaptation initiatives.