Momen called on his counterpart of Cambodia 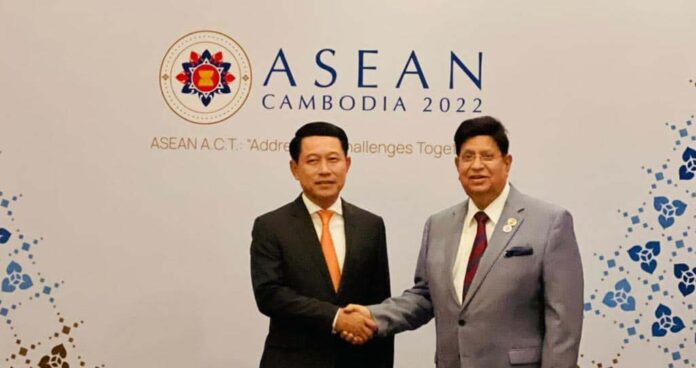 Momen called on his counterpart of Cambodia
Dhaka August 06 2022 :
Foreign Minister Dr. A. K. Abdul Momen, MP called on the Hon’ble Foreign Minister of Lao PDR H.E. Saleumxay Kommasith in Cambodia, this morning.
The meeting reviewed the whole gamut of the existing excellent bilateral relations and the Foreign Ministers renewed their commitment to further cementing them. 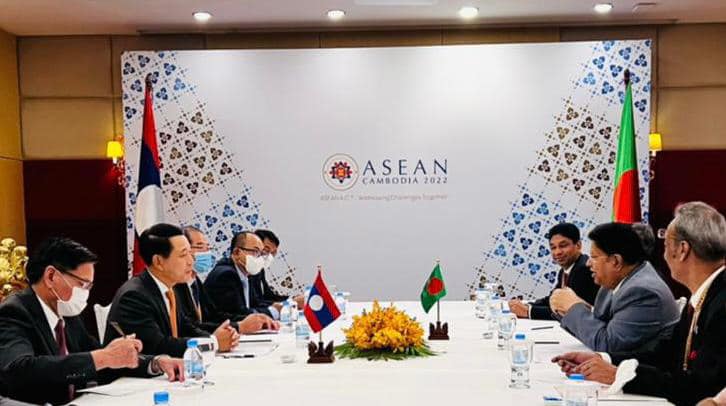 During the meeting, Foreign Minister Momen invited Lao PDR to invest in different sectors, particularly in priority sectors in the Economic Zones, agriculture and ICT sectors of Bangladesh. He also proposed the regular exchange of trade delegation and trade related offer in order to create opportunities and potentials for bilateral trade and investment which is essential for both countries.
Highlighting the need to further promote people-to-people contact between the two countries, Dr. Momen expressed happiness that a diplomat from the Ministry of Foreign Affairs of Lao PDR participated in a short course organized by the Foreign Service Academy of Bangladesh, the first time ever such an exchange took place.
In this connection, Dr. Momen reiterated our offer for short training courses for twelve young diplomats ( one from each ASEAN member state and two from the Secretariat) as well as the proposal for exchange of ten youths from Bangladesh to the ASEAN countries and ten youths from the ASEAN countries to Bangladesh under a Youth Exchange Program. 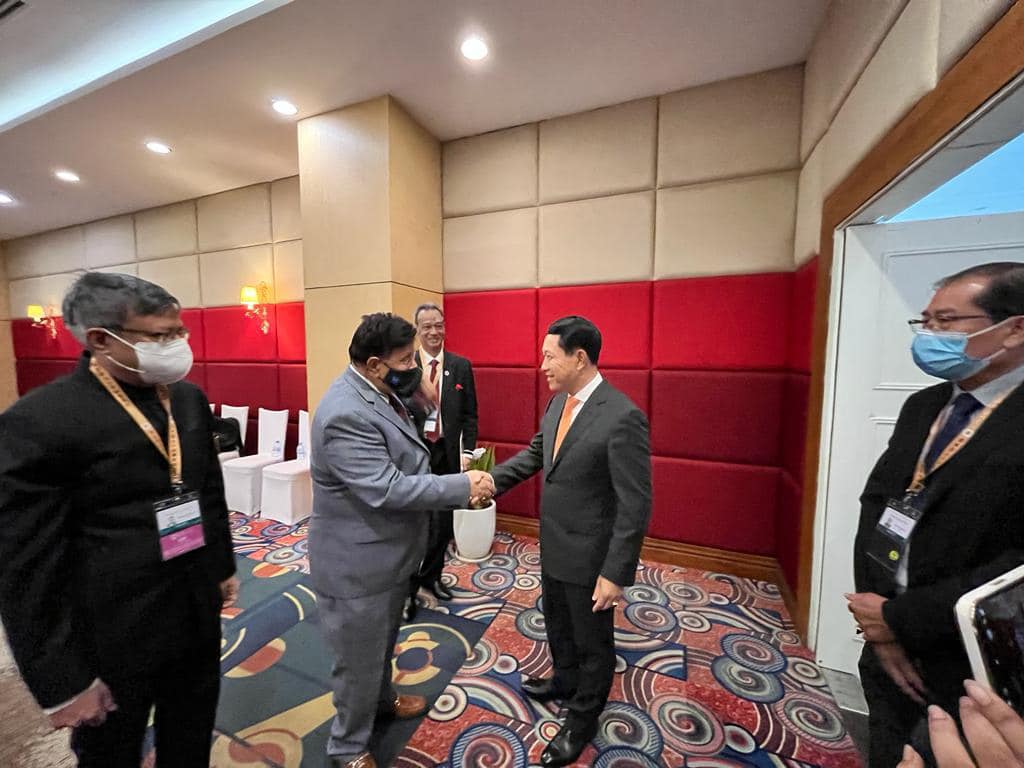 In reply, Mr. Saleumxay admired the proposal of Bangladesh and wished to exchange the best knowledge and practices. Dr. Momen urged the Foreign Minister of Lao PDR to play a more proactive role in bringing a sustainable solution to the protracted Rohingya crisis by initiating a speedy, safe and dignified repatriation of the forcibly displaced people back to their motherland Myanmar. He requested Lao PDR to exert its friendly influence on Myanmar to take its citizens back to Myanmar.
On the other hand, appreciating the tremendous socio-economic growth in Bangladesh in the last decade, the Foreign Minister of Lao PDR explicitly showed his strong willingness to strengthen trade and investment ties with Bangladesh.
Dr. Momen took the opportunity to encourage Lao PDR for importing Bangladeshi products including electronic equipment, pharmaceuticals, cements, jute and jute products, ceramic and leather goods to meet the local demand. At the conclusion, both the Ministers discussed the possibility of a High-level visit between the two countries and the Foreign Minister of Lao PDR readily accepted the invitation.
Momen emphasized on collective efforts by the ASEAN leaders to tackle challenges 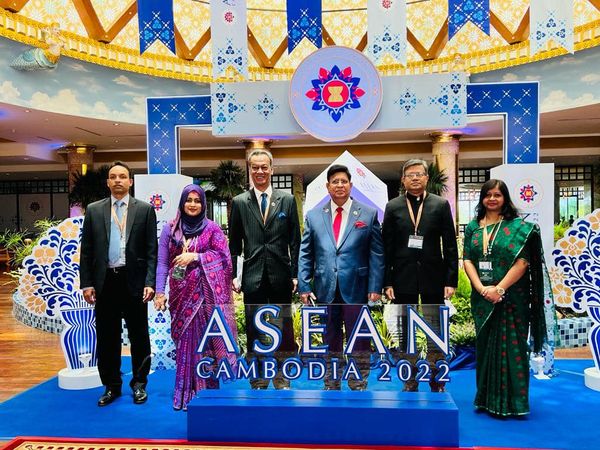 Dhaka August 06 2022 :
Foreign Minister Dr. A. K. Abdul Momen, M. P. emphasized on collective efforts by the ASEAN leaders to tackle challenges faced by the ASEAN region while delivering a speech today at the 29th Meeting of ASEAN Regional Forum (ARF) under the theme “ASEAN A.C.T.: Addressing Challenges Together”.

During his remarks, Momen highlighted some key challenges including recurring waves of new variants of Covid -19, global turmoil due to conflict in Europe, climate change, economic recession, and food and commodity crises that can only be adequately and effectively addressed through mutual trust and cooperation underpinned by multilateral arrangements like ARF.
While presenting an overview of Bangladesh’s socio-economic development in the last decade and a half, he stated with the Father of our Nation Bangabandhu Sheikh Mujibur Rahman’s vision of a world free of economic inequalities, social injustice, exploitation, aggression, and threats of nuclear war, Bangladesh government is working relentlessly under the dynamic leadership of Prime Minister Sheikh Hasina to transform Bangabandhu’s vision into a reality.

Momen raised that in the fifth year of the Rohingya crisis, not a single Forcibly Displaced Myanmar Nationals has been repatriated to Myanmar. Momen seek more focus and active support from the ARF countries for a durable solution to this crisis, particularly the ASEAN leaders’ support, and request them to strengthen their ongoing efforts to help create an environment within Myanmar that will encourage the Rohingyas to return. Dr. Momen also raised the issue of the high FDI Myanmar secured despite the genocide it committed and atrocities it did. He also points out that after the 2017 Rohingya invasion, even EU countries’ trade and investment increased substantially. In terms of foreign direct investment, the EU was the 5th largest foreign investor following other Asian Countries. He also reminiscent the history that during the 1970s, 1980s, and 1990s, there was economic sanction on Myanmar and therefore, they repatriated thousands of their nationals in the 1970s and 1990s through dialogue and discussions. He requested the western leaders to impose strong economic sanction on Myanmar as unless economic sanction is imposed on Myanmar, Myanmar is not likely to listen to world leadership.
Meanwhile, he pointed out that delaying the repatriation process may pose a security threat to the entire region and beyond.

Foreign Minister stated that Bangladesh is the link between two of the world’s most vibrant economic regions, Southeast Asia and South Asia. It seeks to promote itself as a hub of road, rail, riverine, maritime, and air connectivity for landlocked South Asian countries/regions and continental Southeast Asian countries. Bangladesh believes that maximizing the Bay of Bengal’s potential and improving connectivity can revitalize the region. To this end, Momen highlighted our massive investment in developing and upgrading infrastructure, including ports, land ports, airports, roads and rail networks. He expressed Bangladesh’s aspiration to collaborate and cooperate with ASEAN by becoming a Sectoral Dialogue Partner. He sought support from all the ASEAN Countries in this process. Dr. Momen concluded his speech with six proposals for ensuring resilient economic cooperation in the region:
First, strengthen cooperation, collaboration and shared responsibility between and among countries;
Second, research, investment, and advanced technology sharing for trade promotion;
Third, the rapid development of connectivity;
Fourth, common action to mitigate the adverse impacts of climate change.
Fifth, Marine resource exploration, development
Sixth, creating an energy hub in this region.

He reiterated Bangladesh’s commitment to work closely with ARF for our collective development and prosperity
ASEAN is a multilateral, regional platform that aspires to accelerate economic growth, social progress and cultural development in the region and promote regional peace and stability through abiding respect for justice and the rule of law in the relationship among countries. 29th ASEAN Regional Forum (ARF) held on 5 August 2022 in Phnom Penh. Foreign Minister Dr. A. K. Abdul Momen, M.P., led Bangladesh delegation to the 29th ARF Meeting. Regional Organizations of the Ministry of Foreign Affairs facilitated participation of the Hon’ble Foreign Minister in the Meeting hosted by Cambodia, the current Chair of the ARF. Foreign Ministers, Deputy Foreign Ministers and other delegates of the 27 ARF Member States participated in today’s Meeting. The Meeting was chaired by the Deputy Prime Minister, H.E. PRAK Sokhonn, Minister of Foreign Affairs and International Cooperation of the Kingdom of Cambodia .
The Meeting ended with the signing of a Joint Statement titled “ASEAN Regional Forum Framework on Promoting Peace, Stability and Prosperity in the Region through Preventive Diplomacy” and “ASEAN Regional Forum Statement on Supporting the Preservation of Southeast Asia Nuclear Weapon-Free Zone.” Chairman’s Statement of the 29th ASEAN Regional Forum was also adopted. 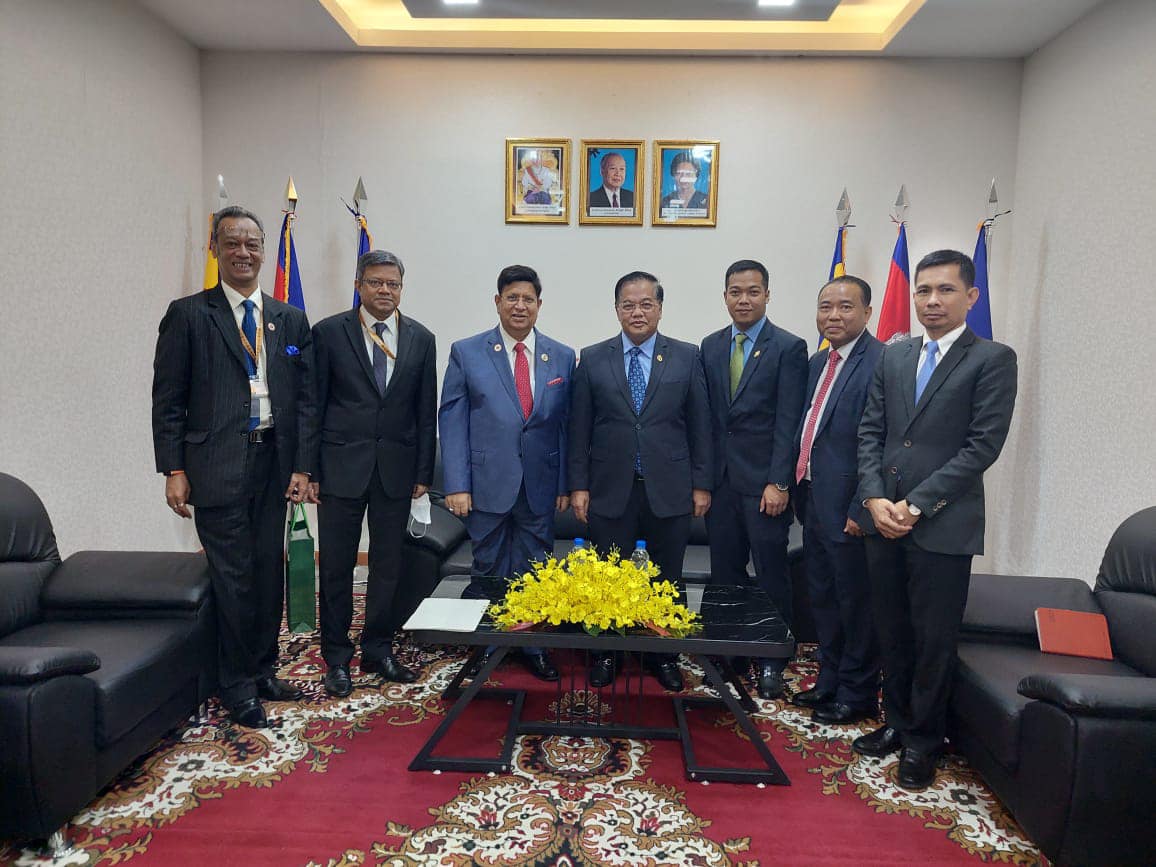 During the meeting, Dr. Momen apprised the Minister about the Bangladesh’s long established tradition of liberal, moderate and tolerant religious way of life that conditioned an environment of non-communal peaceful coexistence by the followers of different faiths. He also stated that religious harmony is the motto of our Prime Minister. He further added that our Father of the nation Bangabandhu Sheikh Mujibur Rahman was a devoted Muslim and he established many Muslim institutions.

Dr. Momen underscored that Bangladesh is a Muslim majority country where 90% of her people are Muslims. Secularism is a state principle firmly enshrined in the constitution of the country. He highlighted that Bangladesh maintains a policy of ‘zero tolerance’ towards all forms of terrorism. He stressed that the people from Buddhist Religion are happy in our country.

In response, Hassan informed that 93% of Cambodian people are Buddhists, 5% are Muslims and 2% are the believers of other religions. He further added that they have Muslim members of the Parliament. The Cambodian Senior Minister sought the support of Bangladesh in becoming a member of OIC. He also sought support from Bangladesh for agricultural machineries for their mills. 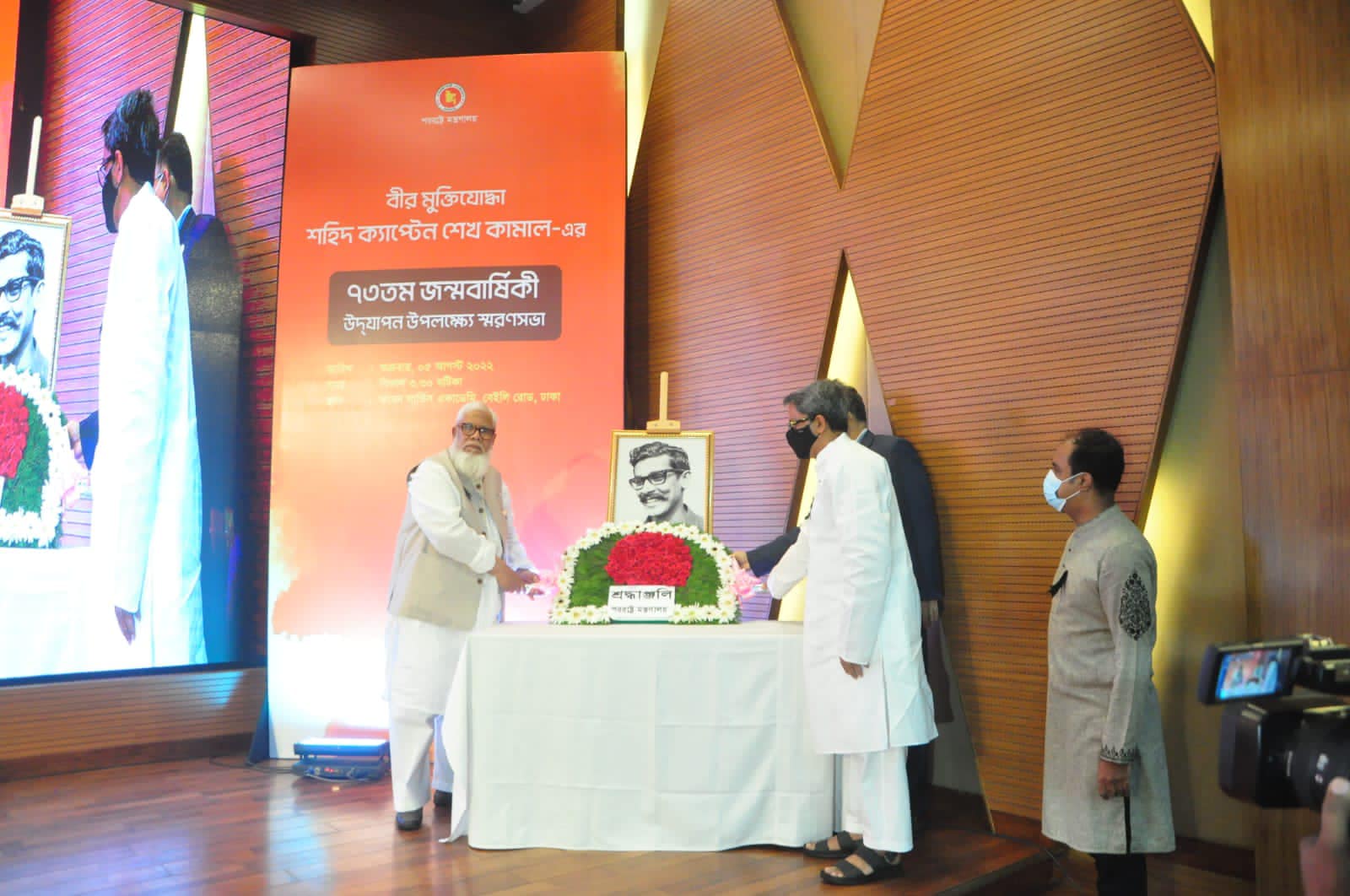 Ministry of Foreign Affairs arranged a Discussion Session on the observance of the 73rd Birth Anniversary of valiant freedom fighter Shaheed Captain Sheikh Kamal, the eldest son of the Father of the Nation Bangabandhu Sheikh Mujibur Rahman, at the Foreign Service Academy on August 05 2022. 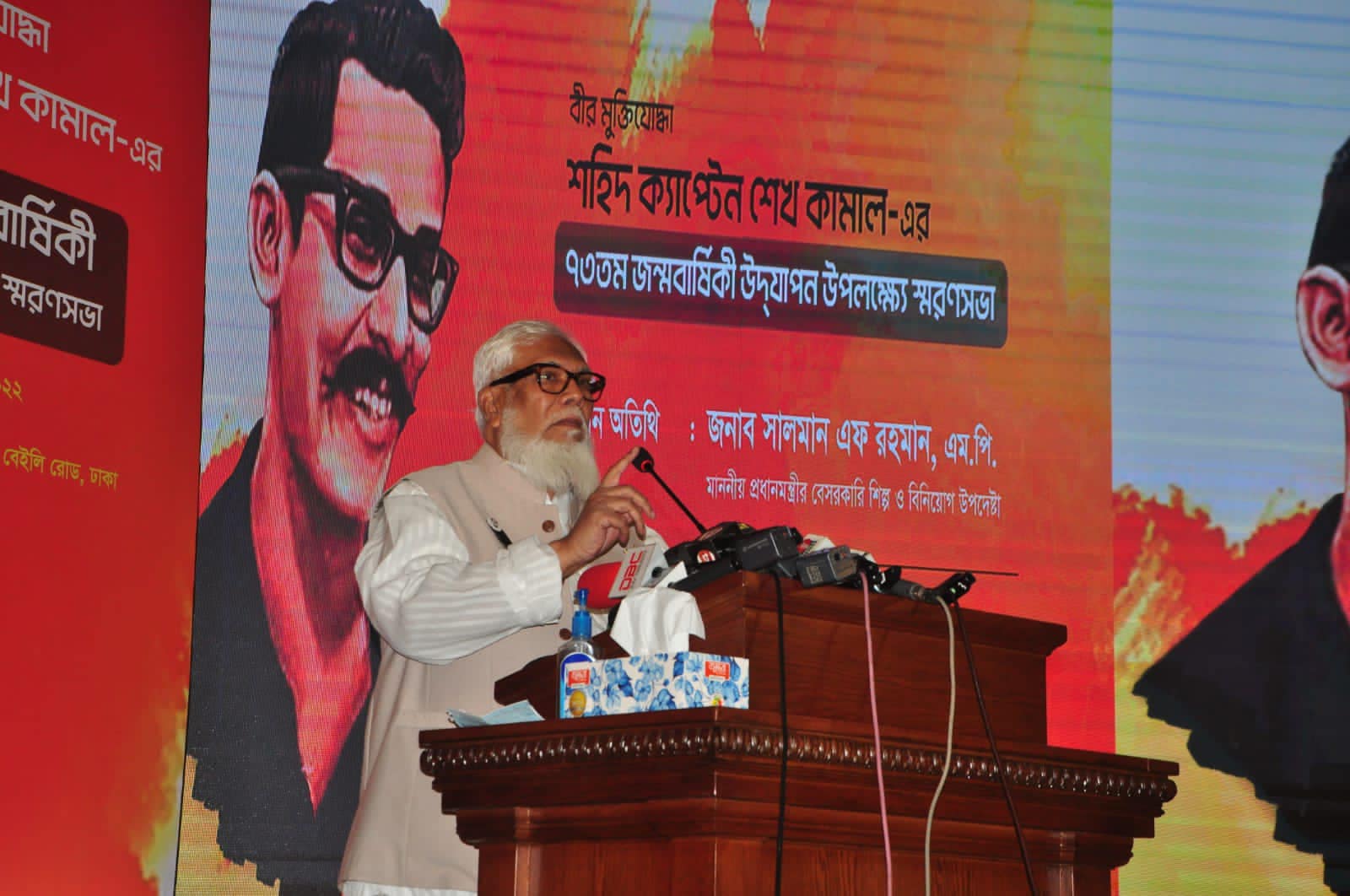 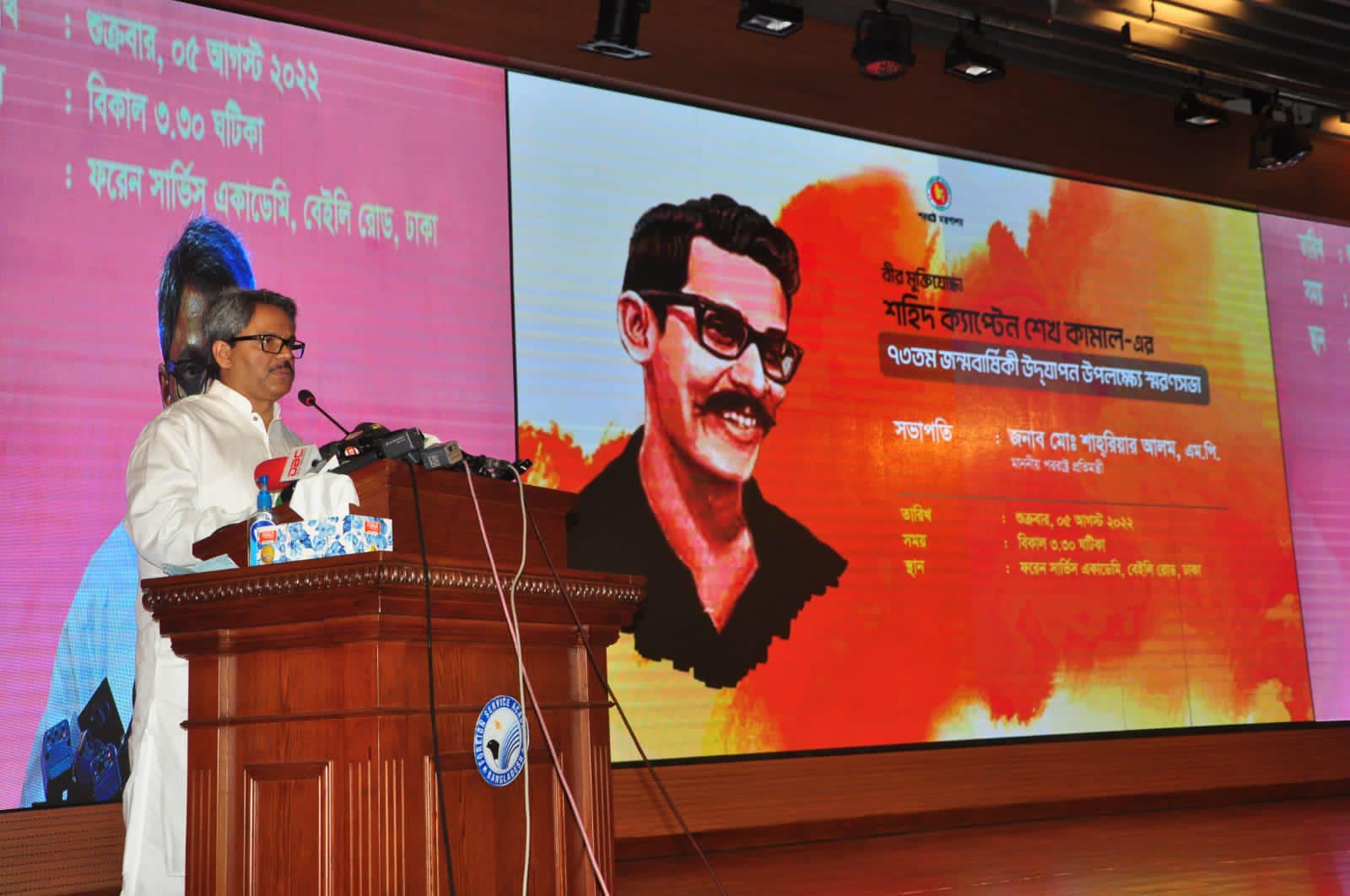 Foreign Minister Dr. A. K. Abdul Momen, MP who is in Cambodia on an official visit, sent a video message on this occasion. 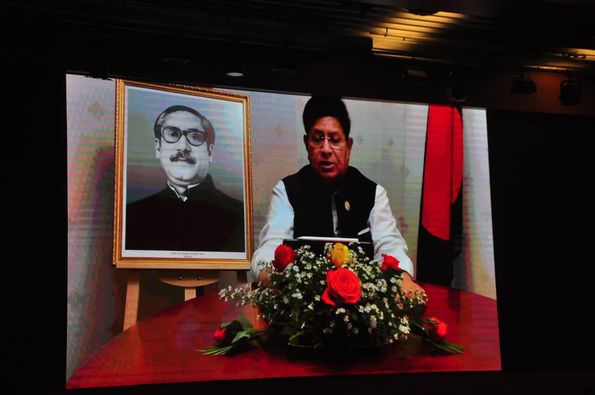 Parliamentary delegation from Nepal visited the mausoleum of the Father of the Nation, Bangabandhu Sheikh Mujibur Rahman, in Tungipara on August 05 2022 afternoon. 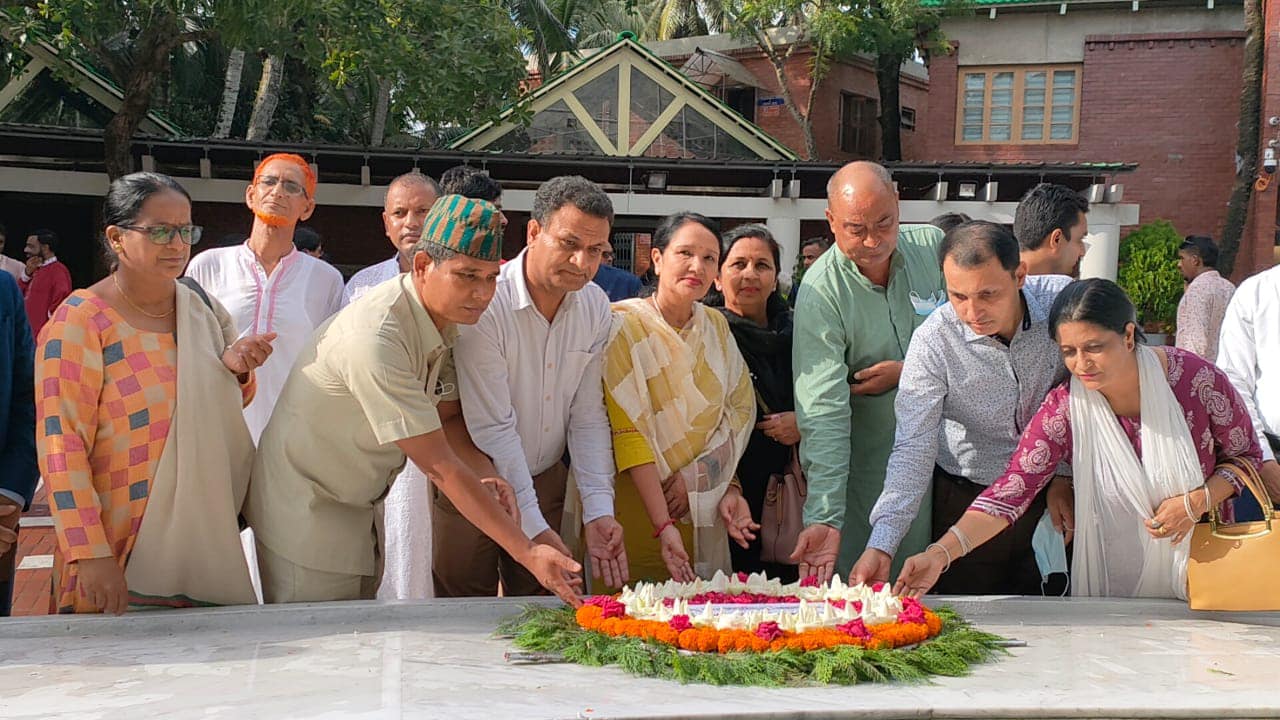 The delegation paid tribute to Bangabandhu, and placed floral wreaths at the mausoleum.