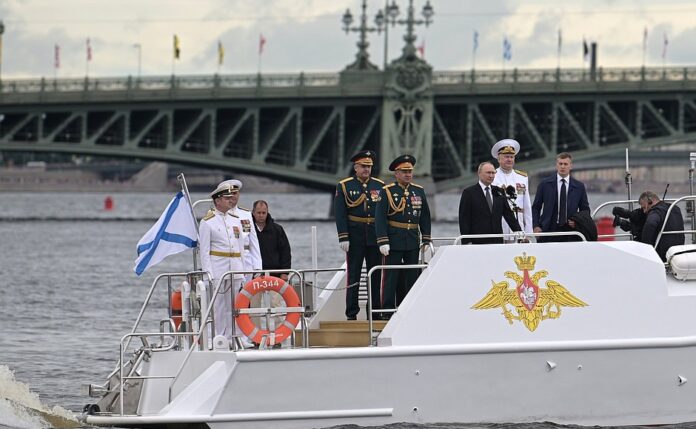 On Russia’s Navy Day the Supreme Commander-in-Chief reviewed the Main Naval Parade held in St Petersburg and Kronstadt on July 31 2022. 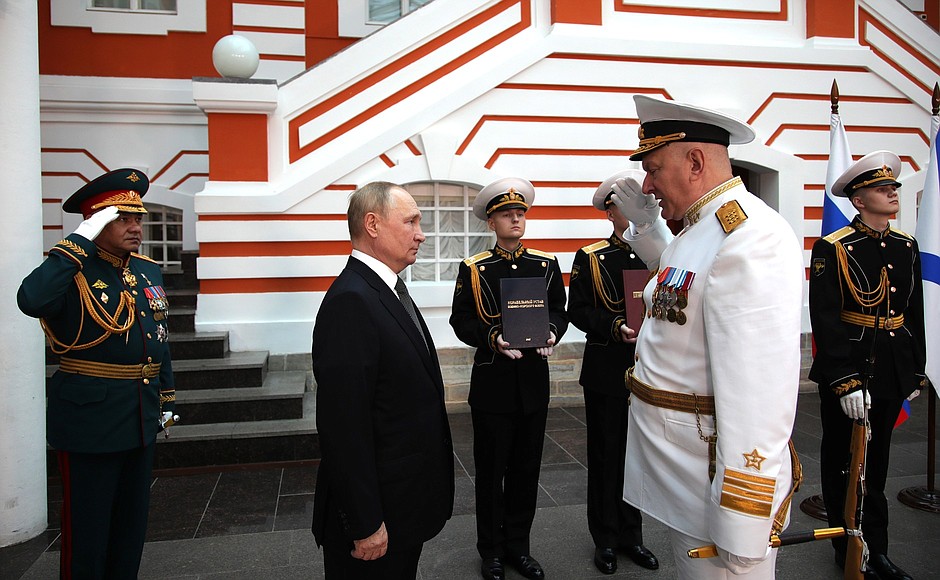 In addition to this, earlier in the day, Vladimir Putin made the rounds of a parade line of military ships in the Gulf of Finland and the Kronstadt Yard, saluted crews and congratulated them on Navy Day from the deck of the naval cutter Raptor.

More than 40 ships, cutters, and submarines, as well as 42 aircraft and more than 3,500 troops are taking part in Russia’s Main Naval Parade in 2022.

The vessels that took part in the parade on the Neva included the counterterror boats P-468, Vladimir Nosov and Nakhimovets, the landing boats Ivan Pasko and D-67, Raptor-class patrol boats, the base minesweeper Pavel Khenov and the ocean minesweeper Aleksandr Obukhov, the missile boat Chuvashiya, the guided missile corvettes Zelyony Dol and Odintsovo, and the patrol boats of Mangust, M14 and Marlin 900 classes.

Taking part in the parade in Kronstadt were the missile cruiser Dimitrovgrad, the guided missile corvettes Passat and Sovetsk, the small anti-submarine ships Urengoy and Kazanets, the corvettes Stoiky and Soobrazitelny, the patrol boat Yaroslav Mudry, the coast guard vessel Ladoga, the training ship Perekop and the diesel-electric submarine Magadan. 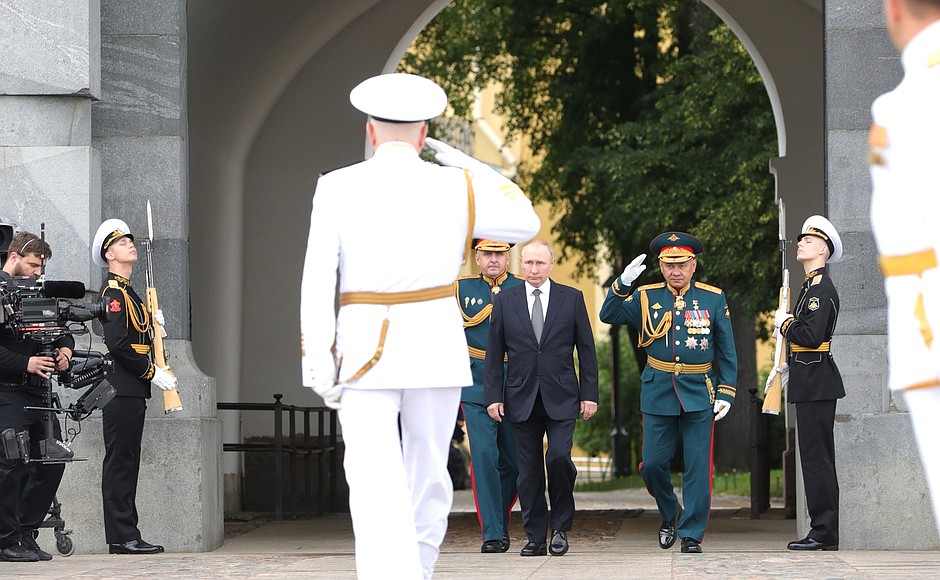 The parade concluded with a march past of ceremonial naval regiments and cadets of the Kronstadt Naval Cadet Corps and the Nakhimov Naval School, as well as sea boys of the Yunarmy Movement.

Address by the President of Russia at the Main Naval Parade 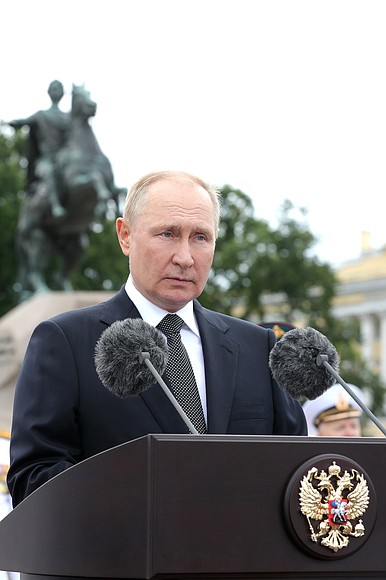 I congratulate you on Navy Day, which is held dear by the people of Russia and cherished by everyone who has served or is serving in our glorious Navy.

We are celebrating all of you, all generations of the valiant guards of our Fatherland’s naval borders, the great naval leaders and the fearless crews of warships from many centuries. We express gratitude to the serving seamen and officers for their unrivalled combat skills, courage, heroism and commitment to the Fatherland and our people.

This year it has coincided with the 350th birth anniversary of Peter the Great, the founder of the Russian Regular Navy. Under his guidance, Russia attained the status of a great naval power and authority and influence across the world.

Peter the Great created an inseparable and everlasting link between the history of the navy and the Russian state. Since its very inception, our navy has been involved in all the most important, seminal events, becoming stronger together with the country and the people in times of hardships and in great victories, and increasing its glory and might.

We are rightfully proud of this. All of us know from childhood many examples of heroism and selflessness of many generations of seamen, shipbuilders and researchers, hardened people with versatile knowledge.

Naval service is a calling. The fleet brotherhood, with its team spirit, disregard for hardship and strong will – this is in the blood of ship captains, officers, and all the crew. The word of military sailors is rock solid and their efforts are limitless.

These century-old traditions have been taken to the next level in the new Navy Regulations. I signed them today. I also approved the new Naval Doctrine of the Russian Federation.

We set the boundaries and areas of Russia’s national interests – economic, vital and strategic – clearly and transparently. First and foremost, these are our waters of the Arctic, the Black Sea, the Sea of Okhotsk, the Bering Sea, and the Baltic and Kuril Straits. We will ensure their protection rigorously and using all available tools.

And here the capabilities of the Russian Navy are paramount. It is capable of instantly responding to all those who decide to impinge on our sovereignty and freedom, successfully carrying out its strategic missions on the borders of our country and on any latitude of the World Ocean with dignity. Its coastal, surface, air, and underwater forces and other means are highly prepared for decisive action. They are constantly being improved.

We need only mention the newest unmatched Zircon hypersonic missiles, which have no obstacles. They will be supplied to the Armed Forces of the Russian Federation within the next month.

The Admiral Gorshkov frigate will be the first to go on combat duty with this formidable weapon aboard. The area in which the ship equipped with Zircon hypersonic cruise missiles will carry out its duty will be selected based on Russia’s security interests.

We will continue the large-scale construction of ships and vessels, as well as marine research programmes. Major changes will take place in seaside regions. And, of course, the well-being of the families of navy personnel, shipbuilders, and workers of all those industries connected with the sea and the fleet, will remain our top priority. 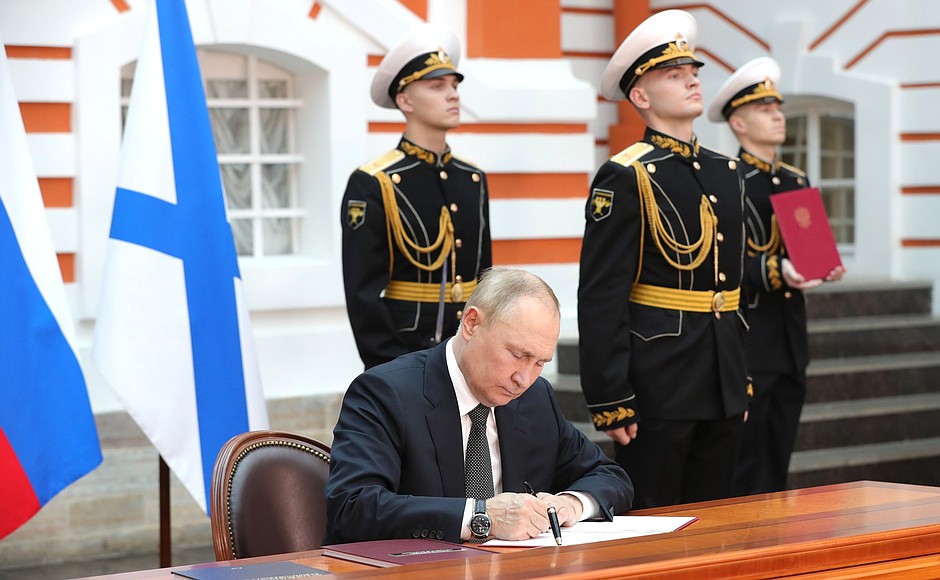 The current environment requires commensurate, prompt, and decisive actions from us. I am convinced that the current generation of sailors and officers represent a reliable and indestructible backbone of the Fatherland.

For all of us the Motherland is a sacred notion and its protection is the highest calling and meaning of life for each of us.

I have faith in you and thank you for the service.

Hail to the Russian Navy!