Comment by Foreign Ministry Spokeswoman Maria Zakharova on the safety of nuclear facilities in Ukraine on July 25 2022.

Recently, increasing concern has been caused by the tense situation around Zaporozhye NPP, which has been escalated by the Ukrainian authorities, including by spreading misinformation about the alleged negative impact of Russia’s representatives at the plant on ensuring its safety.

We have repeatedly stressed that Russia has shown utmost responsibility with regard to Ukrainian nuclear facilities and done everything in its power to ensure not only an adequate level of nuclear and physical safety, but also the greatest possible transparency in this matter.

At the end of June 2022, together with the IAEA Secretariat we prepared a visit to Zaporozhye NPP of an international mission led by IAEA Director General Rafael Grossi, which was aimed at carrying out activities in the framework of implementing the IAEA safeguards as well as verifying compliance with safety standards at the NPP.

Extensive and complex preparatory work had been done to coordinate all details of the visit: the route of the mission, measures to ensure the delegation’s safety and the involvement of high-ranking foreign specialists.

Unfortunately, the visit did not take place due to the counterproductive position of the UN Secretariat’s leadership, which refused to support the IAEA Secretariat’s initiative under the far-fetched pretext of insufficient security and poor timing of the event.

Disrupting the visit played into the hands of the Kiev regime and its Western sponsors, who were not satisfied that the Director General, agency experts and international representatives included in the mission would have an opportunity to see the real situation at the Zaporozhye NPP and make sure it was functioning properly.

It was after the disruption of the visit that Kiev’s armed provocations against the NPP increased manifold: drone strikes were carried out against the territory of the plant, as well as actions aimed at intimidating its personnel.

The Russian Foreign Ministry has repeatedly reported on these incidents, distributing information circulars in the IAEA. In fact, by its actions Ukraine blatantly violated all seven principles of nuclear safety, formulated by the IAEA Director General, ignored the resolutions of the IAEA General Conferences of 1985 and 1990, which state that any armed attack or threat to attack nuclear facilities used for peaceful purposes violates the principles of the UN Charter, international law and the IAEA Charter.

We warn the Zelensky regime against continuing provocations against Europe’s biggest nuclear power plant, which could lead to a nuclear accident whose grave consequences would affect more than just Ukraine. We call on the international community to be vigilant on this issue and condemn the actions of the Kiev authorities. 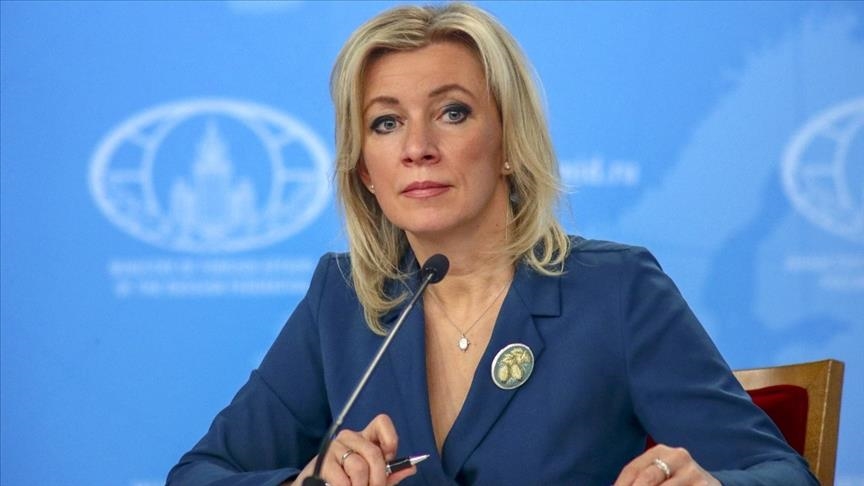 Question:  How would you comment on the European Union’s decision to allocate an additional 500 million euros for arms supplies to Ukraine?

Maria Zakharova: This shows that the EU is completely unprepared to facilitate a political settlement in Ukraine. By providing the Ukrainians with weapons and military equipment, the EU continues to invest in continuing hostilities. At the same time, it is saying hypocritically that it offered an olive branch to Russia. Any attempts to achieve victory on the battlefield is a direct road into the abyss for both Kiev and Brussels.

The European Peace Foundation was established just over 12 months ago. As it delivers weapons, it would therefore be more correct to call it the War Foundation. Since its inception, the Foundation has already spent 2.5 billion euros on weapons for Ukraine. This accounts for almost 50 percent of its budget up to 2027. Consequently, the EU sponsors should assume the same responsibility as the Kiev regime for the war crimes committed by the armed forces of Ukraine and nationalist battalions for the murders of civilians, women, senior citizens and children and for the destruction of the civilian infrastructure, including bridges.

Some other glaring manifestations of double standards completely discredit the EU, which proclaims the primacy of the law as one of its pillars yet tends to grossly violate its own regulations on arms deliveries to third-party countries. These regulations are formalised in the EU Council’s Common Position 2008/944/CFSP December 8, 2008, defining common rules governing control of exports of military technology and equipment. Obviously, the Western paradigm of a rules-based international order implies that those who invent these rules do not necessarily have to comply with them. What is important for them is that everyone else follows them.

In the past five months, the West has been pumping weapons to Ukraine without respite, all the while trying to hush up the unpleasant fact that this policy spells unprecedented risks for the domestic security of the EU and its citizens. The West also overlooked rampant corruption among the authorities in Kiev. Everything was sacrificed to the ambitions of certain EU leaders and its member countries striving to inflict maximum possible damage on Russia.

Now the EU and its law enforcement agency, Europol, are forced to openly admit that the weapons supplied to Ukraine have started surfacing in European countries and replenishing the arsenals of local organised crime groups. In fact, we had insistently warned them about this at the time.

It is hardly surprising that on July 11, the EU launched its Support Hub for Internal Security and Border Management in Moldova. Its key tasks include efforts to prevent arms and migrants from infiltrating the EU member states. However, one doubts the effectiveness of this measure because instead of stopping arms deliveries to Ukraine, Brussels prefers to wage an a priori losing battle with all ensuing consequences.

Is the EU becoming a party to the conflict?