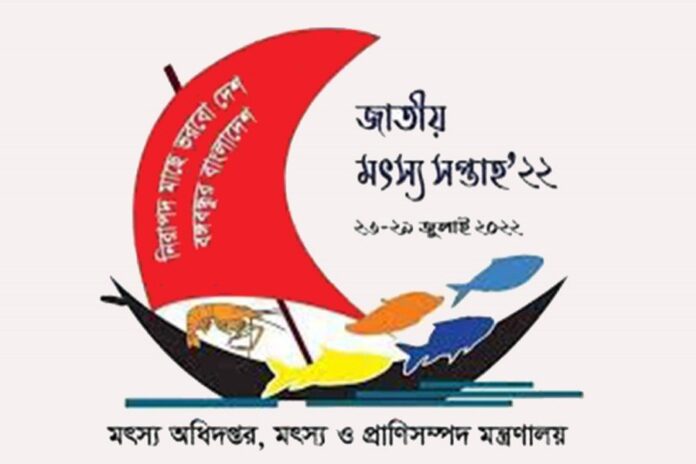 The “National Fisheries Week-2022” began across the country today aiming to make the people aware to increase production of safe fish.

The week will be observed till July 29 with the theme of “Nirapad Machhea Varbo Desh, Bangabandhur Bangladesh (The country will be filled with safe fish, Bangabandhu’s Bangladesh)”.

They wished success of all programmes taken marking the week across the country.

Considering the huge potential and importance of the fisheries sector, the government has taken diversified programme for development of the sector, said the President in his message.

To transform the country into a developed one by 2041, the President urged all concerned to work together for utilizing the huge potential of the fisheries sector.

Prime Minister Sheikh Hasina, in her message, said fish and fish products are one of the export items of Bangladesh.

“Our government is determined to ensure safe and healthy fish products in the international and domestic markets,” the premier added.

Father of Nation Bangabandhu Sheikh Mujibur Rahman identified the fisheries sector as one of the important sectors to meet the nutritional needs of the people of the newly independent country, improve the socio-economic conditions and earn foreign exchange, she said.

She hoped that all concerned will work more diligently for the development of the fishery sector of the country which has huge potential.

To observe the week, the Ministry of Fisheries and Livestock has taken elaborate programmes, a ministry press release said.

Marking the National Fisheries Week, central programmes will be held in the capital while local programmes at district and upazila levels.

As part of the central programme, a rally was held at Manik Mia Avenue in the capital this morning, the first day of the week.

A colourful boat rally was held at Hatirjheel in the capital this afternoon.

On the second day of the week, on July 24, Prime Minister Sheikh Hasina will release fish fry in the Ganabhaban Lake at 9:50 am and she will officially inaugurate the National Fisheries Week 2022 by connecting virtually from Ganabhaban as the chief guest at the inauguration ceremony to be held at Bangabandhu International Conference Centre in the capital at 10 am.

The National Fisheries Medals will be awarded in various fields in recognition of contribution to the country’s fisheries sector.

Supplements have been published in different national dailies.

On the third day of the week on July 25, President Abdul Hamid will release fish fries in the lake of Bangabhaban.

In addition, as part of the central programme, a three-day Central Fish Fair will be held on the premises of Bangabandhu International Conference Centre here.

A week-long programme is being aired in electronic media highlighting the importance of Fisheries Week.

Besides, the weeklong district and upazila level programmes, marking the National Fisheries Week, include carrying out public awareness campaigns, displaying banners and festoons, screening documentaries on the progress and achievements of the present government in the fisheries sector, conducting mobile courts to implement fisheries laws, giving suggestions to the farmers for fish farming and distributing fish farming materials among the farmers.