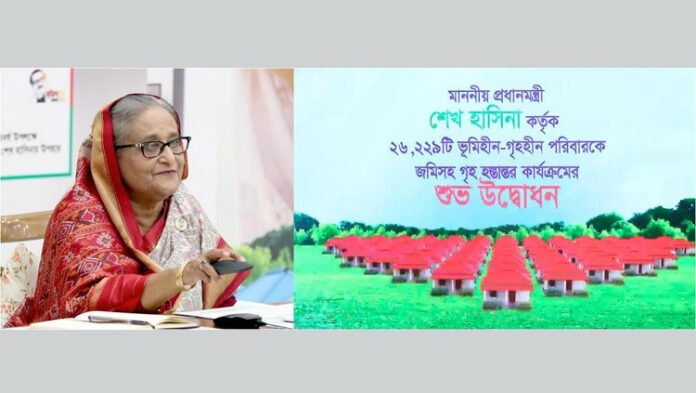 Prime Minister Sheikh Hasina today distributed 26,229 more houses to homeless families as part of her government’s effort to ensure housing for the landless people, declaring 52 upazilas of the country as homeless and landless free.

She handed over the houses to homeless people of five places in five districts under the third phase of Ashrayan-2 Project, connecting virtually from her official residence Ganabhaban here this morning.

Apart from handing over the houses, Sheikh Hasina also announced 52 upazilas, including all upazilas of Panchagarh and Magura districts, as homeless and landless free.

Prime Minister’s Principal Secretary Dr Ahmad Kaikaus earlier on Monday in a media briefing said a total of 67,800 more single houses are being handed over across the country under the third phase of Ashrayan-2 Project.

Besides, 26,229 houses will be distributed on Thursday while the rest of 8,667 houses are being constructed, he said.

According to the project details, a total of 117,329 single houses were constructed under first and second phases of the project while 185,129 houses were allotted till 2021-2022.

On January 23, last year, some 63,999 homeless and landless families received houses under the first phase, while 53,330 families got a roof over their heads under second phase of the Ashrayan-2 Project on June 20 last year.

At the third phase of Ashrayan-2, the government has raised the cost along with bringing changes in design to make the houses more sustainable and climate-resilient.

Now the landless and homeless people will get better quality tin-shed semi-pucca houses on two decimals of land.

The government is constructing the houses having strong great-beam, lintel and Reinforced Concrete Column (RCC) pillar for making the houses more sustainable.

Ahmad Kaikaus informed that Taka 4,028.96 crore was allocated for construction of single houses till the fiscal year 2021-22.

Some 1,242 specially designed houses have been allotted for char region under the third phase, he mentioned.

Special design for portable houses has been made so that the houses can be shifted to other places in view of any natural disaster like cyclone or flood, he added.

Apart from khas land, he said the government has purchased 191.79 acres of land for rehabilitating homeless and landless people.

“Purchasing lands by government is a unique example in the world,” he said.

According to the project details, Taka 134.49 crore has been allocated for purchasing lands.

A total of 8,462 landless and homeless families will be rehabilitated on the houses to be built on the purchased lands.

The government recovered 5,512.04 acres of khas land from illegal occupation across the country for constructing houses for the project on the occasion of Mujib Barsho. Approximate market price of the recovered khas land is Taka 2,967.09 crore.

Under the project, rehabilitated families are brought under VGF programs for 3 months.

The unique feature of the Ashrayan Project perceived by Prime Minister Sheikh Hasina is that there is a special connection of housing activities with the United Nations Sustainable Development Goals (SDGs).