Govt will ensure home for all: PM 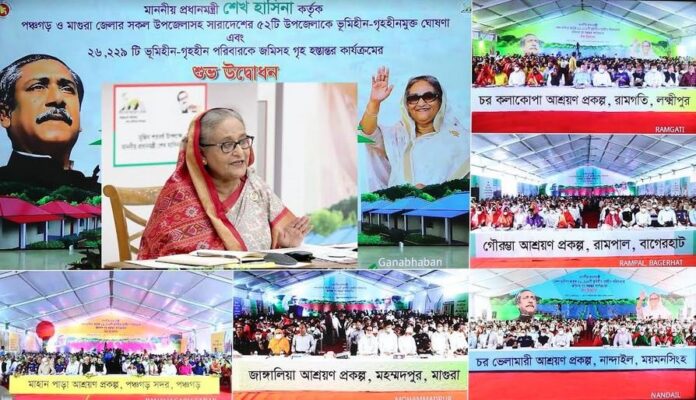 Govt will ensure home for all: PM

Prime Minister Sheikh Hasina today expressed her firm conviction that the present government will ensure home for everyone irrespective of their political affiliation and views, saying it’s her responsibility as premier to provide decent life to countrymen.

“If anyone has information about landless or homeless, please let us know. Irrespective of their political affiliation and views, we will provide house to them who are homeless. We will also arrange the address and livelihood for them,” she said.

The premier said there may be differences in views and opinion, but, it does not matter as “the country is ours. And I am the Prime Minister of Bangladesh, that means, I am responsible to every citizen of Bangladesh”.

She made the remarks at the handing over ceremony of 26,229 more houses to homeless people of five places in five districts under the third phase of Ashrayan-2 Project, connecting virtually from her official residence Ganabhaban here this morning.

Sheikh Hasina said even if there are differences in ideals, opinion and believes, the main identity of a human being is human and that is how she considers people.

She continued: “I see human being as a human and I want every person to spend a decent life. That is my father’s lesson. That’s why I want to provide a good livelihood to every people of this country.”

The prime minister also declared Magura and Panchagarh as landless-and-homeless free districts at the function.

Apart from the nine upazilas of Magura and Panchagarh districts, she simultaneously announced another 43 upazilas of different districts across the country as landless-and-homeless free.

On this auspicious moment, Sheikh Hasina said, “We are very much happy that due to our initiative we’ve attained a primary success that all nine upazilas of two districts became fully free from landless and homeless people.”

The 43 other upazilas of various districts across the country also got the same status, she said.

“This is the big achievement. I hope that, all districts and upazilas of Bangladesh will be free from landless and homeless people this way,” she said.

Mentioning that every people of the country will have a house and an address, she said, “Insha Allah we will be able to do that and I believe it.”

The prime minister also urged Awami League and its all affiliated organizations, all political parties, administration, law enforcement agencies and public representatives to find out landless or homeless people, if any, in their respective areas to manage house for them.

“I am asking all . . . to provide information about any landless and homeless people so that we could give them a house and an address,” she said.

The premier today distributed 26,229 more houses to homeless families as part of her government’s effort to ensure housing for the landless people.

At the outset of the ceremony, Asrayan Project Director Abu Saleh Mohammad Ferdous Khan made a presentation on the activities of the project.

A video documentary on Asrayan Project and homeless-and-landless people was screened.

The prime minister also said that it is the responsibility of the beneficiaries to protect the houses that has been given to them.

She asked them to develop their lives availing professional training that the government is providing to them and explore their income sources.

“We want that you will procure your own land in the future and build houses there,” she said.

Regarding the houses which are being given to the homeless and landless people, Sheikh Hasina noted: “This is not just a house; it is the future, shelter and address of you, your family, and your next generation.”

The head of the government regretted that the adverse impact of Covid-19 pandemic and Russia-Ukraine war with US sanction on Russia caused problems for the government to procure fertiliser and food.

She said, “Inflation shoots up worldwide, not only in Bangladesh. Prices of essentials have increased, scarcity of food is being seen across the globe, even the developed countries are facing the heat.”

In this connection, she mentioned that even developed countries are maintaining austerity in power and fuel.

Sheikh Hasina went on saying that, “We are running our country quite well, but we have to be cautious from now on. We have taken cautionary measurers.”

She urged all to save electricity, water, fuel and use every inch of land in food production.

“Whatever you want to do, just do it, so you could produce your own food. Then, we will not need to beg to anyone,” she added.

She asked all to remain alert as there might be a flood in the Southern region during this monsoon season.

She again put emphasis on personal savings, food or money, to face any sort of calamities in the near future.

“We, as the government, are always beside you, if you remain alert, Insha Allah, we will be able to overcome any disaster and we have that ability,” she added.