Homeআন্তর্জাতিকBiden could declare climate emergency as soon as this week : report
আন্তর্জাতিক

Biden could declare climate emergency as soon as this week : report 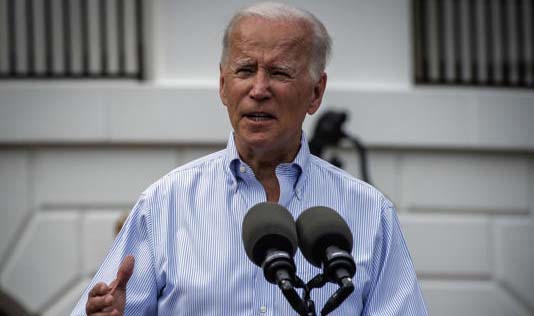 Biden could declare climate emergency as soon as this week : report

President Biden is considering declaring a national climate emergency as soon as this week as he seeks to salvage his environmental agenda in the wake of stalled talks on Capitol Hill, according to three people familiar with the matter who spoke on the condition of anonymity to discuss the private deliberations.

The potential move comes days after Sen. Joe Manchin III (D-W.Va.) told Democratic leaders that he does not support his party’s efforts to advance a sprawling economic package this month that includes billions of dollars to address global warming. If an emergency is invoked, it could empower the Biden administration in its efforts to reduce carbon emissions and foster cleaner energy.

Two of the individuals with knowledge of the discussions said also they expect the president to announce a slew of additional actions aimed at curbing planet-warming emissions. The exact scope and timing of any announcements remain in flux.

“The president made clear that if the Senate doesn’t act to tackle the climate crisis and strengthen our domestic clean energy industry, he will,” a White House official, who requested anonymity to describe the deliberations, said in a statement late Monday. “We are considering all options and no decision has been made.”

Jared Bernstein, a top White House economic adviser, emphasized to reporters at a news briefing earlier in the day that Biden would work “aggressively fight to attack climate change.”

Top aides to Biden are debating the best course of action as another punishing heat wave has descended this week on the central United States, and as a similar weather pattern is breaking temperature records across Europe. Many Democrats have called on the White House in recent days to use its powers to address global warming as hopes for congressional action have faded.

“This is an important moment. There is probably nothing more important for our nation and our world than for the United States to drive a bold, energetic transition in its energy economy from fossil fuels to renewable energy,” Sen. Jeff Merkley (D-Ore.) told reporters Monday.

Citing the impasse, Merkley added: “This also unchains the president from waiting for Congress to act.”

It is unclear how, exactly, Biden plans to proceed if he opts to declare a climate emergency, which Senate Majority Leader Charles E. Schumer (D-N.Y.) urged him to do just days after the president took office last year.

Some climate activists have urged the White House in recent months to deploy an emergency declaration to maximum effect, arguing that it would allow the president to halt crude oil exports, limit oil and gas drilling in federal waters, and direct agencies including the Federal Emergency Management Agency to boost renewable-energy sources.

But the president faces a tough balancing act as he seeks to calibrate his response to a warming planet with the recent economic reality of high gas prices. The policies could aid in Biden’s quest to halve U.S. emissions by the end of the decade compared to 2005 levels, though they still fall short of what Biden aimed to enact through his earlier economic plan, known as Build Back Better.

Any new executive action on climate also could face a formidable court challenge, which could affect the future of environmental regulations. Last month, the Supreme Court cut back the federal government’s powers to regulate power plants’ carbon emissions.

The president himself raised the prospect of executive action on climate change last week, as talks collapsed between Democratic leaders and Manchin over what might have been the largest infusion of climate-related spending in U.S. history.

Initially, Democrats had hoped to invest more than $500 billion in new programs to cut emissions and support new technologies, including electric vehicles, before Manchin raised objections to the Build Back Better Act. The West Virginian’s opposition proved politically fatal, since party lawmakers require his vote to advance any bill using the process known as reconciliation — a tactic that allows Democrats to sidestep a GOP filibuster in the narrowly divided chamber.

Democrats soon set about rethinking their plans, eyeing what might have been $300 billion in climate-focused investments in a bid to satisfy Manchin. But the moderate senator, who represents a coal-heavy state, last week said he could not support his party’s attempts to advance such spending this month amid record-high inflation.

Manchin later expressed an openness to tackling climate change but said he would do so only after seeing another round of indicators next month. But many Democrats said they did not want to take the risk, leaving them no choice but to shelve their plans entirely — and focus their attention instead on health-care proposals Manchin does support.

Others called for another round of engagement with the senator, citing the fact that executive action alone may not be enough.

Sen. Ron Wyden (D-Ore.), the leader of the tax-focused Senate Finance Committee, said in a statement Monday that lawmakers at least should explore renewing tax credits that boost cleaner technology.

“While I strongly support additional executive action by President Biden, we know a flood of Republican lawsuits will follow,” Wyden said. “Legislation continues to be the best option here. The climate crisis is the issue of our time and we should keep our options open.”