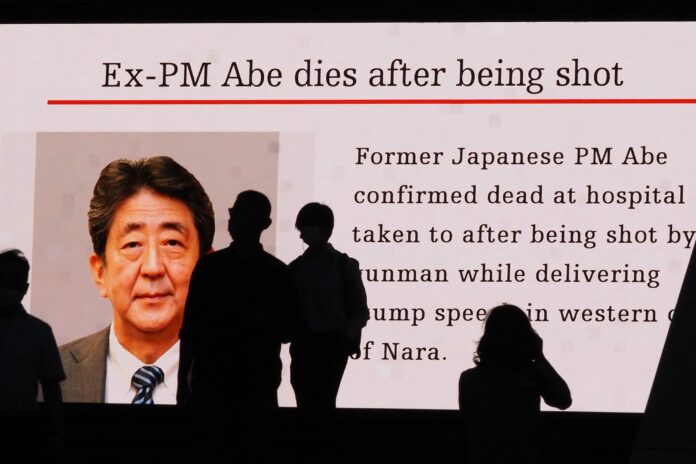 An NHK reporter on site heard what sounded like two gunshots at around 11:30 a.m. She saw Abe collapse and bleed, before he was taken to hospital.

Police say they have arrested a 41-year-old man for attempted murder. Defense Ministry sources say he worked for the Japan Maritime Self-Defense Force for three years up to 2005.

Abe was Japan’s longest-serving prime minister. He was 67.

Local media has reported Shinzo Abe’s death at the hands of a gunman, now in custody.
Former Japanese Prime Minister Shinzo Abe has been pronounced dead after being shot during a public event, NHK has reported, citing the ruling Japanese Liberal Democratic Party. The death was also confirmed by a party source, who spoke to agency Kyodo News.

Abe was taken to hospital in grave condition after a gunman injured him during a public appearance in the city of Nara in western Japan. He was campaigning as a candidate in an upcoming parliamentary election.

Doctors said that significant blood loss from the gunshot injuries had led to his ultimate demise. Abe’s neck was seriously wounded in the attack, medics said, and some of the damage had gone deep enough to damage the heart. The politician was brought to hospital with no vital signs, and attempts to resuscitate him failed.

Chief cabinet secretary Hirokazu Matsuno was among the first to corroborate details of the attack on Friday, calling it “unforgivable” while noting that a suspect had been arrested.

NHK news identified the man as Yamagami Tetsuya, said to be in his 40s and to have served in Japan’s Maritime Self-Defense Force for three years. He was arrested for attempted murder, and a weapon has reportedly been retrieved from the scene. The television channel said the police found items at the man’s home that may be explosives.

Witnesses said the gunman fired on at 67-year-old Abe from behind, and reported hearing two loud bangs before seeing the former leader collapse on stage.

Japan’s longest-serving prime minister, Abe resigned in 2020 due to health issues but remained an influential political figure, and was speaking on behalf of the ruling Liberal Democratic Party when he was shot.

The attack was condemned by public figures in Japan and internationally. Incumbent Prime Minister Fumio Kishida branded it a “barbaric act” that has no place in a modern society. Russia compared it to an act of terrorism and praised Abe for the role he’d played in improving relations with Moscow during his time in office.