Another minister resigns from UK government 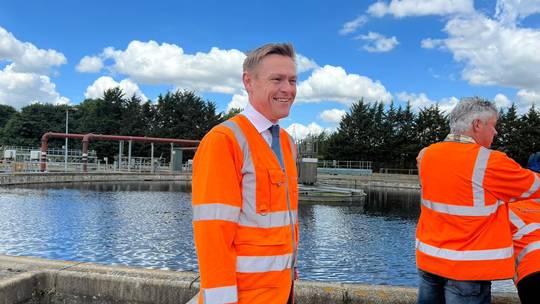 Another minister resigns from UK government

Junior Education Minister Will Quince, who defended PM Boris Johnson just days ago, has stepped down.

In an appearance on Sky News on Monday, Quince said No. 10 assured him that Johnson was not aware of allegations made against Conservative MP Christopher Pincher.

The prime minister’s office has since admitted that Johnson was aware of multiple complaints about Pincher’s alleged “predatory behavior” before appointing him deputy whip earlier this year.

Announcing his decision on Twitter, Quince cited the “inaccurate” assurances about Pincher as a reason for filing his resignation, and wished his successor well.

He is the 12th person to step down, in a wave of resignations that was unleashed on Tuesday evening by two senior cabinet members, Health Secretary Sajid Javid and Chancellor Rishi Sunak. Johnson also lost the support of the Conservative Party vice chair, the trade envoys to Morocco and Kenya, the solicitor general, and several parliamentary private secretaries.

The Tory rebellion against their leader is just the latest challenge for Johnson. One month ago, he survived a no-confidence vote from Conservative MPs over the Partygate scandal, which involved violations of the Covid-19 restrictions at Downing Street. 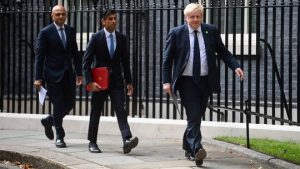 Sajid Javid and Rishi Sunak announced their resignations almost simultaneously.
UK Chancellor of the Exchequer Rishi Sunak and Health Secretary Sajid Javid resigned on Tuesday as ongoing scandals plague the Conservative Party and Prime Minister Boris Johnson. The pair have issued a call for Johnson to quit, declaring he is no longer worthy of leading the country.

“Conservatives at their best are seen as hard-headed decision makers guided by strong values,” Javid wrote in his resignation letter. “We may not always have been popular, but we have been competent in acting in the national interest. Sadly, in the current circumstances, the public are concluding that we are now neither.”

Sunak struck a similar tone, declaring that “the public rightly expect government to be conducted properly, competently and seriously” – implying that the current administration was none of the above.

The senior officials’ resignations came just hours after an admission from 10 Downing that Johnson had known of multiple complaints about the “predatory behavior” of MP Chris Pincher before appointing him deputy whip earlier this year. Pincher quit in disgrace last week after it emerged that he had drunkenly groped two men at a private members’ club.

The scandal is only the latest in a series of controversies circling Johnson’s government, the most prominent of which are the repeated violations by the PM and his administration of their own Covid-19 lockdown protocols.

The Conservative Party was trounced in by-elections last month, a resounding defeat that Johnson seemed unaware of when he made a comment about leading the UK into the 2030s that some party members initially assumed was a joke.

Javid and Sunak were not the only high-ranking Conservative Party members to resign on Tuesday. Vice chairman Bim Afolani resigned live on air during a Talk TV program, declaring that he “can’t serve under the prime minister” and calling for Johnson himself to resign.

“I just don’t think the prime minister any longer has, not just my support, but he doesn’t have, I don’t think, the support of the party, or indeed the country any more,” Afolani said. “I think for that reason he should step down.”

Four conservative MPs – Jonathan Gullis, Saqib Bhatti, Nicola Richards and Virginia Crosbie – also tendered their resignations as parliamentary private secretaries, eager to distance themselves from the 10 Downing. Richards, who described the Conservative Party as it exists as “currently unrecognizable to me,” denounced Johnson’s government as guilty of “pro judgment that I don’t wish to be associated with,” while Crosbie declared she “cannot continue to defend” the PM’s actions, specifically mentioning his knowledge of Pincher’s indiscretions.

Joining the parade of officials filing out the door were trade envoy to Morocco, Andrew Morrison, who described Johnson’s position as “unrecoverable,” and trade envoy to Kenya, Theo Clarke, who also cited Johnson’s knowledge of Pincher’s history of misconduct as a deciding factor in her decision to quit.