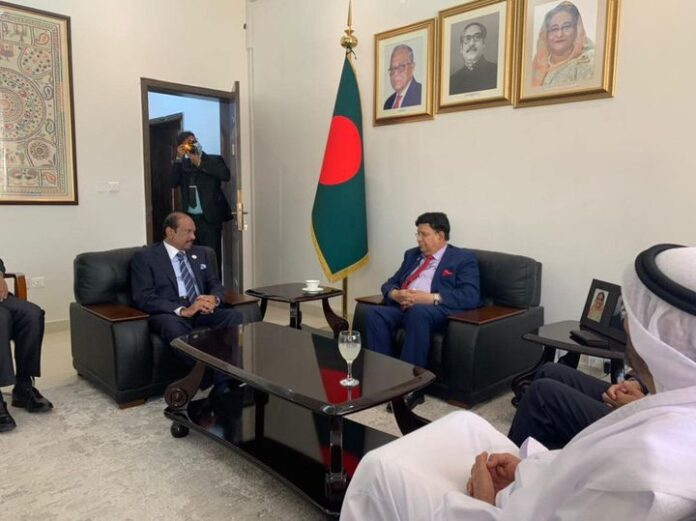 Foreign Minister Dr. A K Abdul Momen has said Bangladesh has been promoting a ‘culture of peace’ which is actually Bangabandhu’s philosophy of peace.

The foreign minister noted that Bangabandhu wanted an independent space for the human life and the human dignity.

Dr. Momen stated this speaking to UAE strategic community while presenting a keynote speech at the prestigious Emirates Centre for Strategic and Security Studies at Abu Dhabi on February 11 2022.

The programme highlights the Vision of Bangabandhu Sheikh Mujibur Rahman on Global Peace and World Security.

Bangabandhu wanted an independent refuge in the very quotidian life of man where he or she could be safe from oppression, hunger, malnutrition, ignorance and hatred, said the Minister.

“Father of the Nation Bangabandhu Sheikh Mujibur Rahman was an ardent campaigner for peace, justice, and humanity. Bangabandhu gave precedence to the ‘rule of law’. Even when those same rules and laws were institutionalised to oppose his vision and his political and economic objectives, Bangabandhu never adhered to violence or hatred as a counter measure,” he said.

Foreign Minister noted that Prime Minister Sheikh Hasina’s vision of the world and of world peace is rooted in the visions of Bangabandhu. During the 66th UN General Assembly in 2011, Prime Minister Sheikh Hasina gave the world a six-point multi-dimensional peace-centric development model for championing democracy and people’s empowerment. The six multipliers of her proposed model include : eradication of poverty and hunger, reduction of inequality and gainful employment,  mitigation of deprivation, inclusion of excluded people, acceleration of human development and including imparting education and technology and elimination of terrorism.

Foreign minister spoke about the economic diplomacy vertices of the government. He noted that Economic diplomacy of Bangladesh is designing ‘Systems’ with flexible and adaptable designs; building ‘Infrastructures’ with the capacity to host multi-level networks; and developing ‘Capabilities’ to create and sustain superior technological efficiency. We are targeting the design space. We wish to build and operate a design space where inclusivity and prosperity for all would be a given and the enhancement of the human capability would be at the core of expectations. A Creative Economy and a Design Economy marked by innovation and entrepreneurship. That’s our alternative to all the doomsday prophecies all around us.

Foreign Minister Dr. Momen is visiting UAE to attend some programmes there. Among today’s programmes, the Chairman of the leading Lulu Group – Yusuf Ali called on the Foreign Minister. Both sides discussed about the possibilities of integrating the country’s productive capabilities to the global supply chain solutions routing through the UAE, the Gulf and the UK and the EU territories.

Later, the Foreign Minister called on the Director General IRENA. Both sides discussed about the possibility of renewable energy production and deployment.

After discussion, the Foreign Minister met with the leading Bangladesh origin business persons and spoke to the Business council.