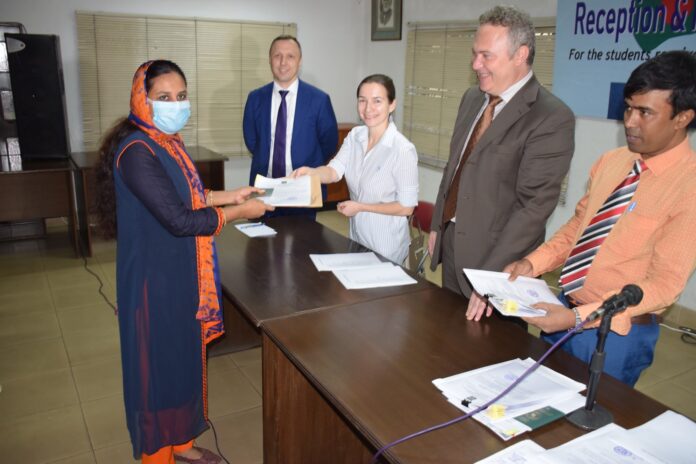 Dhaka Russian House farewell students receiving scholarships in Russian universities
Dhaka November 11 2021 :
The Russian House in Dhaka hosted a traditional farewell meeting for all the Bangladeshi students selected during 2020-2021 for higher studies in different Russian universities on scholarships provided by the Government of the Russian Federation despite corona pandemic blockage at the  host country.
This farewell and reception ceremony held on Wednesday in the city with a batch 75 scholarship receivers who will depart soon to join different Russian universities.
The Director of the Russian House in Dhaka Maxim Dobrokhotov stressed out the right decision of Bangladeshi youth for choosing Russia as destination of higher education.
He spoke with farewell words for their very happy day underlining that after a long wait they’ll be finally able to reach Russia and extended his best luck to all of them.
He recalled that more than five thousand Bangladeshi graduates of Soviet / Russian universities received prestigious and well paid jobs both in the country and abroad who now are working in government, private and various international with high reputation organizations.
The meeting was also attended by Minister-Counsellor of the Embassy of the Russian Federation in Bangladesh Ekaterina A. Semenova and Second Secretary Mikhail V. Katsuro who expressed their deepest congratulations and many warm wishes on that occasion.
Several students who are already studying in Russia also talked about the real experience of their stay in Russia and some aspects regarding educational process.