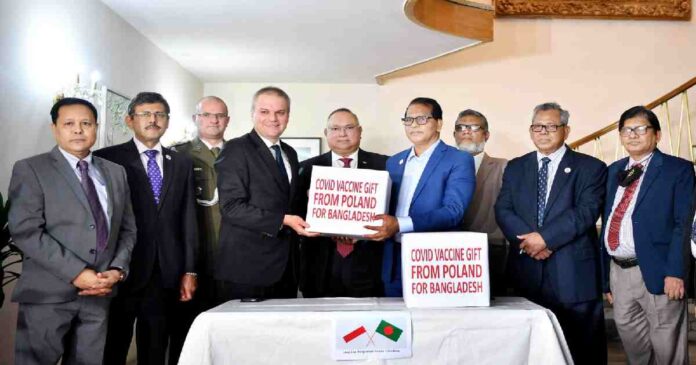 The Government of Poland has provided 3.2 million AstraZeneca vaccines to Government of Bangladesh this morning as a form of solidarity to the friendly country’s fight against COVID-19 pandemic.

At the Padma State Guest House, Dhaka, in an unostantious ceremony, Prof. Adam Burakowski, Ambassador of Poland to Dhaka (resident in New Delhi) handed over the token vaccine doses to Bangladesh side. Lokman Hussain Mia, Senior Secretary of Health Services Division under the Ministry of Health and Family Welfare of the Government of Bangladesh and Rear Admiral (Retd.) Md. Khurshed Alam, Secretary, MAU and acting Foreign Secretary, received the token gifts from the Ambassador.

Senior officials of the Ministry of Foreign Affairs were present during the handover ceremony.