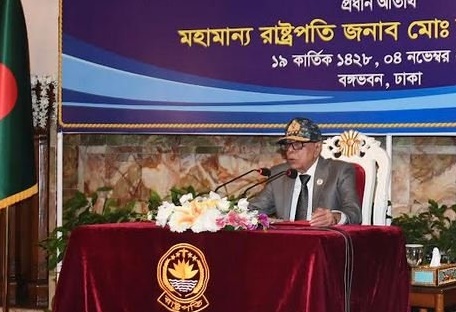 President asks Navy to develop skills in modern tactics, IT

President M Abdul Hamid today asked the naval
force to develop its skills and expertise in modern tactics and information
technology (IT) to face future challenges.

“You (Navy members) need to develop expertise in modern tactics and IT . .
. Each Navy member must perform their respective duties more efficiently and
perfectly by maintaining the optimum level of professionalism,” the President
said while virtually addressing a function of the Navy at Kaptai, Rangamati
this afternoon.

The President, also the Commander-in-Chief of the Armed Forces Division,
virtually attended the National Standard Giving Ceremony at the Parade Ground
of the Banouja Shaheed Moazzam Training Base in Rangamati on November 01 2021.

He said every member of the navy should remain ready to accept any
sacrifice to protect the country’s sovereignty as well as self-dignity.

Being imbued with patriotism, they (Navy) should always keep themselves
ready to carry out their duties with honesty and dutifulness, the President
hoped.

He told the Navy to stay beside the people of the country in their joys and
sorrows, and love the country and its people.

Referring to the maritime resources, Abdul Hamid said, “We are directly and
indirectly dependent on the natural resources of the vast ocean. So,
maintaining a development-friendly environment and ensuring security in the
sea is very important for the national economic development.”

The President said each navy personnel should perform a very responsible
role in implementing various activities of the country’s Blue Economy,
military and economic development, preventing human trafficking and smuggling
in coastal areas, ensuring the safety of fishermen and merchant ships.

He lauded the outstanding role of the naval force during different crises
and natural disasters across the country.

The Navy is playing an active role in dealing with the COVID-19 situation
and raising public awareness, providing emergency medical and humanitarian
assistance and fulfilling the responsibilities directed by the government,
including assisting the local administration, the President added.

Chief of Naval Staff Admiral M Shaheen Iqbal gave the welcome address on
the occasion. He also handed over the National Standard on behalf of the
President.

At Bangabhaban, President Hamid also took a guard of hour in the ceremony
from the parade ground through video conference.

Secretaries concerned and senior civil and military officials were present
at Bangabhaban. 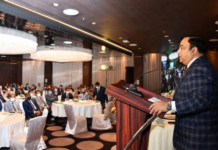 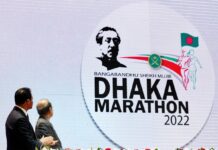 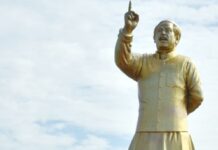