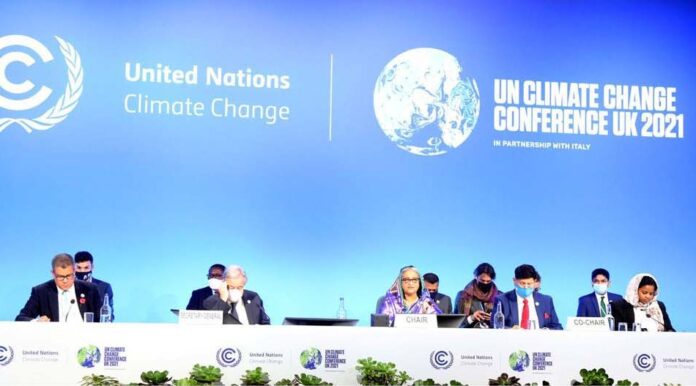 “This is an unfortunate dilemma, and for survival, we have been swayed to adopt measures on our own to face the devastating consequences of climate change,” she said a 48-nation CVF leaders’ dialogue as the forum chair on COP26 sidelines.

Sheikh Hasina called the situation “saddening and disappointing” as until now “the major greenhouse gas emitting countries have failed to deliver their promised annual 100 billion dollar”.

The Bangladesh premier once again reminded the major emitting countries about the extra vulnerability of the 48 CVF member states while presiding over the dialogue.

Sheikh Hasina said the vulnerable countries were trying to tackle the debacle adopting plans with own resources.

Bangladesh, she said, launched the “Mujib Climate Prosperity Plan”, named in honour of the country’s founder Bangabandhu Sheikh Mujibur Rahman, to guide its development path through a low-carbon strategy.

Sheikh Hasina said other CVF members would likewise develop their own such climate resilience plans but feared that no effective action plan would be possible without adequate, sustained, and flexible climate finance.

“Therefore, faced with the existential threat of climate change, we, the CVF members, at this COP, demand that developed countries provide a Delivery Plan of the total 500 billion dollar for each of the entire 5-year period from 2020 to 2024,” she said.

The Bangladesh premier simultaneously reiterated the CVF demand that the fund to be provided with 50:50 ratio between adaptation and mitigation.

She announced that the CVF came up with a “Climate Emergency Pact” chalking up a strategy for climate finance delivery and wanted particularly the major pollution emitter nations to increase their emission lowering target at every subsequent COPs.

“It (the plan) will ensure continuous progress so the temperature rise is contained within 1.5 degree Celsius. We call upon the Presidency of COP26, and all Members of the UNFCCC, to adopt the Climate Emergency Pact as a part of the COP26 Declaration,” she said. 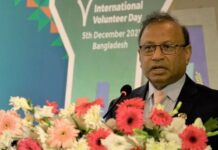 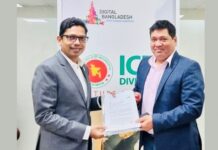 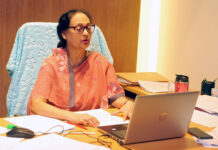