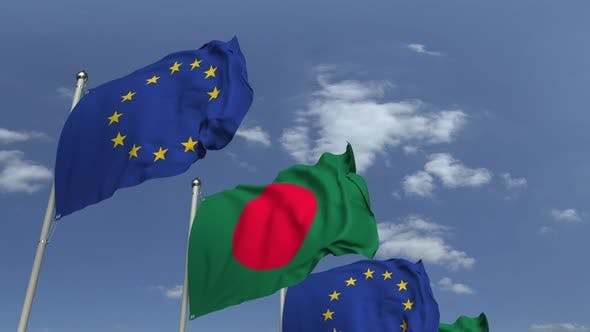 The European Union and Bangladesh met for their fourth Diplomatic Consultations in Brussels yesterday. The Consultations were held in a constructive and cordial atmosphere against the backdrop of the 50th anniversary of Bangladesh’s Independence and the birth centenary of Father of the  Nation Bangabandhu Sheikh Mujibur Rahman.

Both sides welcomed that EU-Bangladesh relations have deepened over more than four decades and thus aimed at broadening the EU-Bangladesh engagement beyond the current priority areas of trade, migration, human rights, Rohingya humanitarian crisis and development cooperation. The EU and Bangladesh agreed to step up cooperation on climate action, digitalisation, connectivity and security, taking into account the EU strategy for cooperation in the Indo Pacific. In this regard, both sides discussed initiating a regular political dialogue for providing strategic guidance and intensifying foreign and security policy cooperation.

Covid response and post-Covid recovery were also discussed. Team Europe mobilized 334 million euro for Covid-19 response and recovery in Bangladesh aiming notably at safeguarding the livelihoods of workers in export-oriented industries. Bangladesh appreciated the EU’s support for the direct Covid-response in the form of medical and personal protective equipment, and the supply of vaccines through the global COVAX facility. Individual EU Member States donated an additional one million Covid-19 vaccine doses to Bangladesh. Bangladesh Highlighted its call for making the COVID vaccine a globally available public good and stressed the need for promoting vaccine production at affordable price for the benefit of low and lower-middle income countries.

The EU commended Bangladesh’s leadership of the Climate Vulnerable Forum (CVF) and of the V20 Climate Vulnerables Finance Summit. The discussion covered a range of topics and priorities in the field of climate change adaptation and mitigation, with the EU signaling, inter alia, interest to support renewable energy, notably regional hydropower generation and energy connectivity. Both sides underscored the  importance of updated Nationally Determined Contributions under the Paris Agreement and the need for mobilizing adequate funding for mitigation as well as adaptation. The EU invited Bangladesh to consider a Green Partnership with the EU, which both sides will discuss in detail at the climate dialogue in Dhaka in early 2022. Bangladesh commended the EU’s commitments towards climate action and the EU provided further information regarding its proposed Carbon Border Adjustment Mechanism.

The EU raised the issue of the Digital Security Act (DSA), expressing concerns that some of its provisions risk going beyond the stated purpose of fighting digital crime and also inquired about certain ongoing trials in this context. The EU also encouraged Bangladesh to implement the recommendations made during the last Universal Periodic Review. The Bangladesh side provided updates and shared its perspectives in this regard.

The EU also commended Bangladesh for its continuing success as the by far largest beneficiary of the EU’s Everything But Arms (EBA) unilateral preferential trade scheme. In this context, the EU welcomed the finalisation and publication by Bangladesh of its National Action Plan on the Labour Sector and stressed the need for its comprehensive implementation as per the stipulated timelines. Bangladesh reiterated the need for ensuring fair prices, especially in view of the investments being made in safer and greener factories.

The EU reiterated its appreciation for the generous role and action of the people and Government of Bangladesh for continuing to temporarily host a million forcibly displaced Rohingyas from Myanmar for more than four years. The Bangladesh side thanked the EU for its political and humanitarian support in the aftermath of the crisis. Both sides stressed the need for voluntary, safe, dignified and sustainable return of Rohingyas to Myanmar and welcomed the signing of the Memorandum of Understanding between the Government of Bangladesh and the UNHCR relating to Bhasan Char.

In the context of the ongoing implementation of the mechanism under Article 25a of the Visa Code, the EU welcomed the progress that Bangladesh has demonstrated in implementing the Standard Operating Procedures for the Identification and Return of Persons without an Authorization to Stay. The EU urged Bangladesh to continue its commitment and demonstrate further concrete results, including on clearing the backlog of cases, and meeting the commitments set out in the Standard Operating Procedures. Bangladesh proposed that the EU look at opportunities to widen legal pathways for migration by creating employment for skilled and semi-skilled workforce from Bangladesh.

Cooperation under the Multiannual Indicative Programme (MIP) of the EU was discussed with a view to enhancing cooperation, particularly in the areas of strengthening health systems and green inclusive development.

The EU presented its new strategy for cooperation in the Indo-Pacific. Both sides discussed the political and security situation in the region, including in Myanmar and Afghanistan, maritime security, as well as counter-terrorism and cooperation within the UN fora.

Both sides agreed to work on this common agenda with a view to reaching concrete progress and deliverables, which will be reviewed in the course of the next consultations, to be held in Dhaka in 2023.